The Story Behind The Song "Somewhere Over The Rainbow"

Joining Mario this morning for Story Behind The Song was David Turpin also known as "The Late David Turpin".  He released his album, "Romances", on Friday 11th October. The album brings together 10 well-known musicians ranging from Conor O'Brien (Villagers) to jazz singer Jaime Nanci. David also wrote the IFTA-winning gothic horror film, The Lodgers, now available on Netflix. As a musician, David has performed with Marc Almond and toured with The Divine Comedy and performed by invitation at gallery venues including The Hugh Lane. 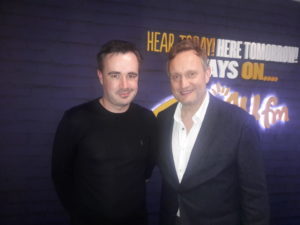 He picked a true beauty and a classic today in "Somewhere Over The Rainbow" the song made famous by Judy Garland - performed in The Wizard of Oz is one known and performed by many over the years. The music was written by Harold Arlen, with lyrics by Yip Harburg. They were asked to write this based on their previous hits, "It's Only A Paper Moon," "Brother, Can You Spare A Dime," and "Lydia The Tattooed Lady."

The original title was "Over the Rainbow is where I want to be." It
could have been Shirley Temple`s signature song but apparently Fox would not release Shirley Temple from her contract nor could she hit the notes to the songs.
The one we have chosen to play is by an Hawaaain Musician - Israel Kamakawiwo'ole ,  he was an Hawaiian ukulele musician and recorded this in a medley with "What A Wonderful World" for his 1993 album Facing Forward.

This version was used in the films Finding Forrester, Meet Joe Black, and 50 First Dates, as well as on the television show ER. Kamakawiwo'ole, more often known as IZ, was very obese, weighing about 750 pounds at one point, and he died from respiratory illness connected with his weight.

His coffin rests in the capital building in Honolulu, the only non-politician of only 3 people to be honoured like this. The Hawaiian state flag flew at half mast on the day of his funeral and thousands of fans came to see his ashes scattered into the ocean.

To listen to the full chat hit the Listen button at the top of this page.

Judy Garland Somewhere Over The Rainbow Wizard OF Oz