Donald Trump is expected to become only the third US President to be impeached later.

Democrats in the House of Representatives are preparing to vote to put him on trial, although the Republican-controlled Senate is unlikely to convict him.

Two articles of impeachment have been drawn up - one accusing Mr Trump of abusing the power of his office, and another claiming he obstructed Congress.

Mr Trump denies abusing his power by pressing Ukraine's leader to launch investigations - which would damage Trump's own political rival, Joe Biden - in return for military aid and a White House meeting. 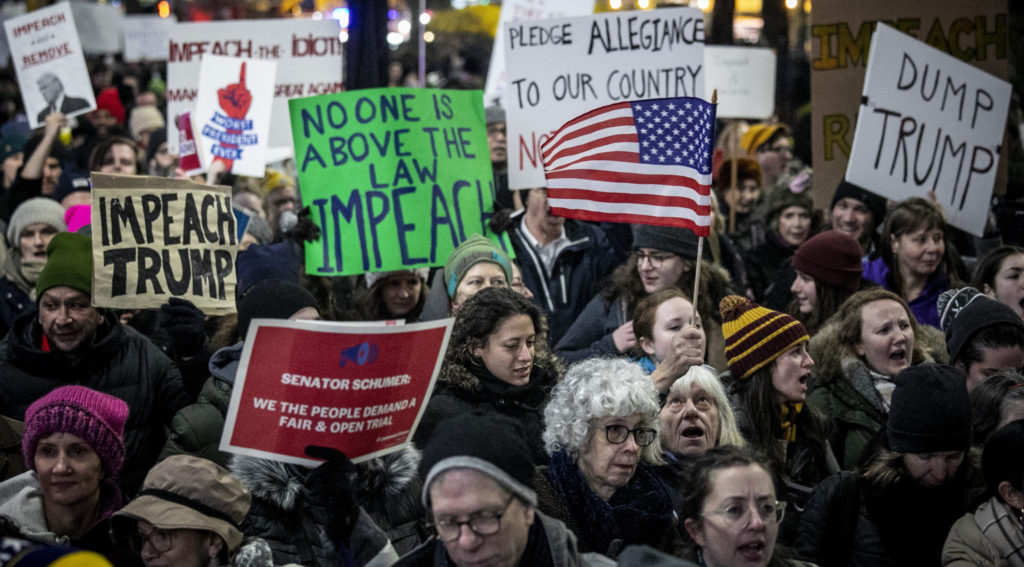 An anti-President Trump crowd gather at a rally to protest and call for his impeachment, Tuesday Dec. 17, 2019, in New York. (AP Photo/Bebeto Matthews)

In a letter to House leader Nancy Pelosi yesterday, the US President angrily slammed the impeachment process.

He claimed: "By proceeding with your invalid impeachment, you are violating your oaths of office, you are breaking your allegiance to the Constitution, and you are declaring open war on American Democracy.

"It is a terrible thing you are doing, but you will have to live with it, not I!"

US media counts indicate that Democrats have now secured enough votes to pass at least one of the two articles of impeachment in the House of Representatives.

That would mean a Senate trial is likely to take place in the New Year.

However, since a two-thirds super majority of senators is needed to formally convict a president, Mr Trump is unlikely to be convicted - meaning he would remain in office.