Tens of thousands of people could be buried in mass graves detected near the besieged Ukrainian city...

Tens of thousands of people could be buried in mass graves detected near the besieged Ukrainian city of Mariupol, according to the city’s deputy mayor.

New satellite images, published by US technology firm Maxar, appear to show a major expansion of graves that originally began to appear at the end of March. 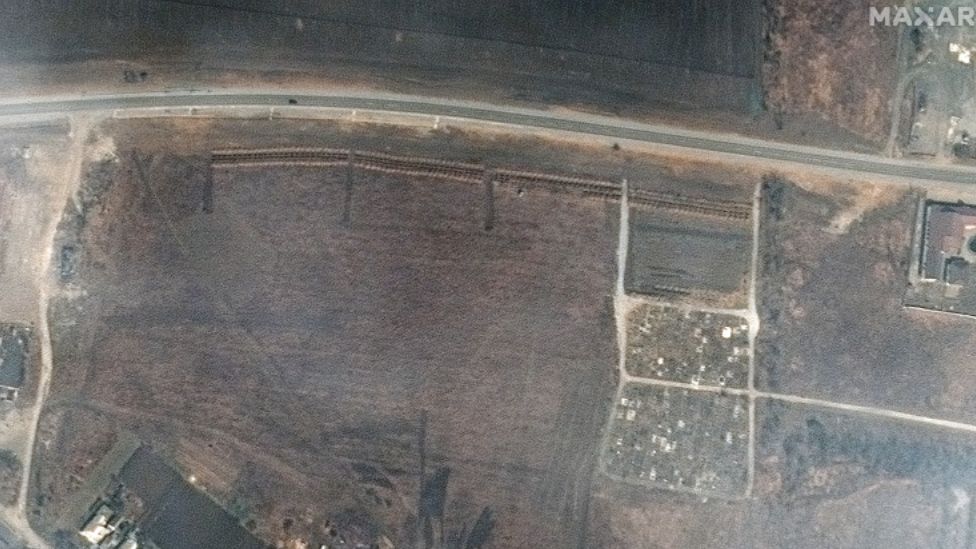 Maxar said the graves are in four sections of linear rows about 85m long. They are located the village of Manhush, about 20km from Mariupol.

It comes after the Russian President Vladimir Putin claimed his troops had ‘liberated’ the city and ordered a blockade around the last remaining area of Ukrainian resistance there.

Mariupol’s Deputy Mayor Sergei Orlov said about 21,000 people had been killed in the city since the siege began.

He said bodies were lying on the streets for many weeks after the invasion began; however, once the massacre at Bucha hit international headlines, Russian troops began hiding the bodies.

He said the massacre in Mariupol is about ten times bigger than that carried out by Russian troops in Bucha.

Mr Orlov said Mariupol "does not exist anymore as a city" and noted that 90% of it is damaged and 45% of it is destroyed.

He said around 900 condominiums have been "totally destroyed" alongside around 21,000 private homes.

"As you can understand from that level of destruction, we have a lot of victims," he said. "In our estimation, the total number of killed people is about 21,000 in our city.

"Several weeks ago, ten days ago, one month ago, there were a lot of dead bodies lying on the street and at some point, they started to disappear.

"It has mostly happened after Bucha became well known. We understand that having such information in the world about these war crimes and genocide, Russia started to hide the victims of its war.

He said the situation is "just totally horrific" - noting that many of his own friends have been killed in the attacks on the city and he does not know whether his relatives are alive or dead.

For the latest on what's happening in Ukraine on Day 58 of the Russian invasion - here's what you need to know:

2,500 Ukrainian Refugees Arrive In Ireland Since Start Of Russian Invasion