Cheeky chappy Olly Murs is coming back to Ireland! If you're an Olly virigin, it's time to pop that...

Cheeky chappy Olly Murs is coming back to Ireland! If you're an Olly virigin, it's time to pop that cherry! He plays Dublin's 3Arena on the 13th May and a very limited number of extra tickets will be released on Friday at 9am.

Our showbiz reporter Shauna O'Reilly was lucky enough to catch up with the man himself.

Shauna gets a second chance with Olly

Shauna told Olly that he was 'her first'. Her first celebrity interview of course! Get your minds out of the gutter. Ten years ago, when she was just a fledgling Today FMer, Shauna went to meet Olly. Now, we don't want to point fingers but she absolutely bottled it. Therefore, she was determined to do better. 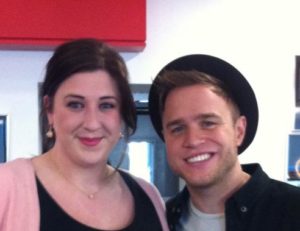 She asked about the upcoming gig and what Irish fans can expect to see. She also quizzed him on his extremely tight trousers and found out more about his first acting role. It seems he might have a future on the screen!

To listen back to the full interview, just hit play and remember to tune into The Ian Dempsey Breakfast Show every weekday morning from 7am.

The Chase Or Tipping Point? What Are You Going For?

The Chase Or Tipping Point? What Are You Going For?