The Charlestown clubman suffered catastrophic damage to his knee in a collision during a match against rivals Galway in the summer of 2018.

The 32-year-old joined Joe Molloy on Off the Ball tonight, and spoke about the experience of being originally told he would never walk again.

"I'll never forget being in Galway University Hospital and the CT Scan... there was a risk that my motor nerve had gone. My foot had [gone] black and I didn't say this at the time because I didn't want the headlines of that piece.

"I'll never forget actually being told by the vascular specialist that 'you will get function of your leg'.

"But I'll never forget being in my hospital bed in Galway University Hospital... you're in a ward but you have the sheets covering your bed. People were whispering saying 'that's Tom Parsons in there, did you see his injury, it was horrific!' 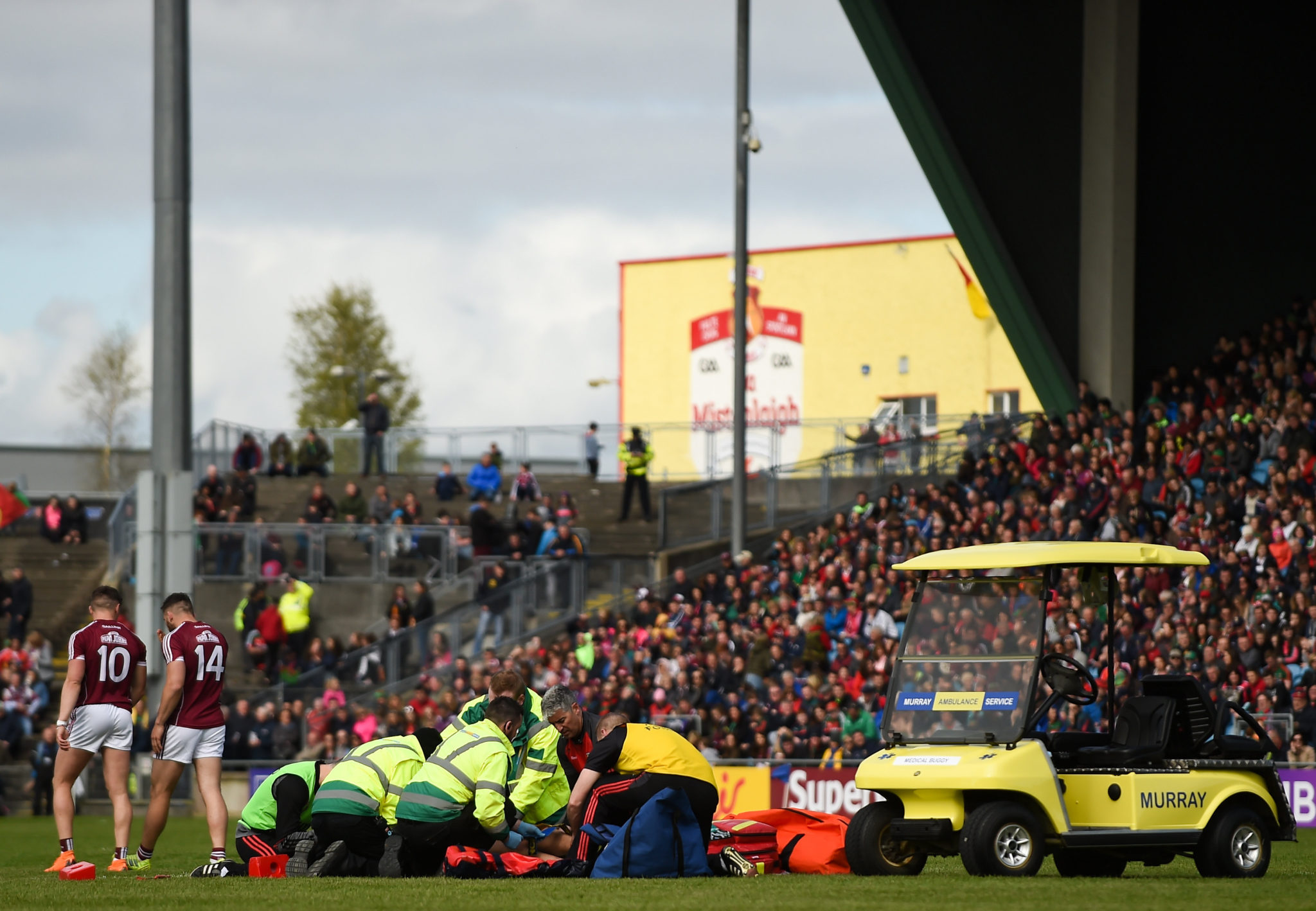 13 May 2018; Tom Parsons of Mayo is treated by medical staff on the pitch after sustaining an injury during the Connacht GAA Football Senior Championship Quarter-Final match between Mayo and Galway at Elvery's MacHale Park in Mayo. Photo by Eóin Noonan/Sportsfile

"I could hear people whispering about my injury and in that then, this doctor came in... he picked up the chart... and I was in pretty good form at the time because I was just told my motor nerve was intact.

"He just put the chart down and he said 'My friend, my friend, this is a car crash injury. You will never be able to run again, this is your reality.'"

Parsons, who broke onto the Mayo senior panel back in 2008, says though he never gave up on returning to the field of play.

"I was just like 'woah.' I'll never forgot that, but that was medical opinion, reading the chart, but from day one when I went into the Sports Surgery Clinic, the surgeon was Ray Moran, a fantastic guy, Enda King.

"Nobody said this was beyond the realms of possibilities but there was no doubt about it, I think publicly people had definitely said that was the end. I'll never forget the medical opinion in the hospital that day though. 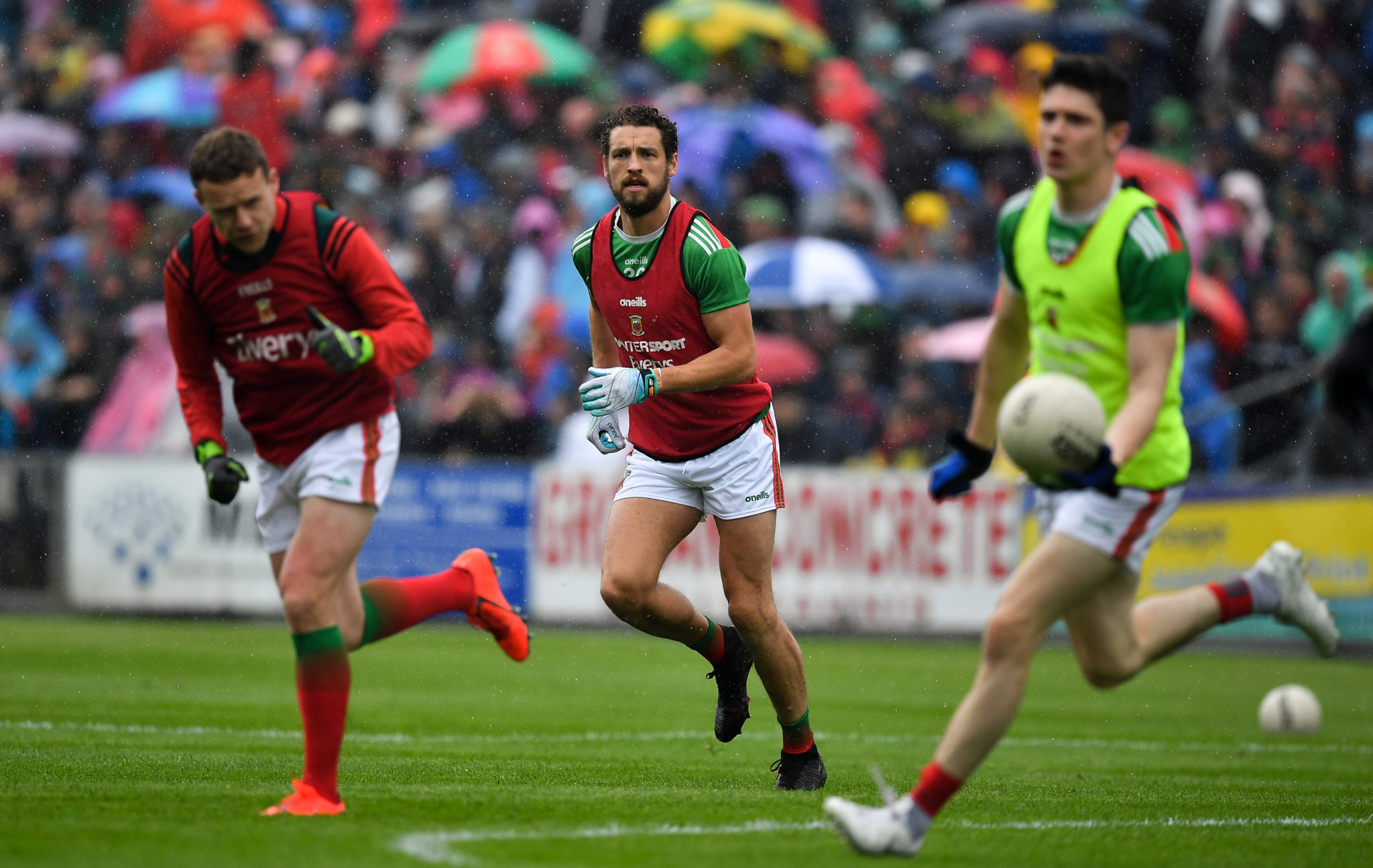 3 August 2019; Tom Parsons of Mayo during the warm-up prior to the GAA Football All-Ireland Senior Championship Quarter-Final Group 1 Phase 3 match between Mayo and Donegal at Elverys MacHale Park in Castlebar, Mayo. Photo by Brendan Moran/Sportsfile

"I'll tell you what, the sense of gratitude you get when a specialist comes in and says 'you're a lucky man, you'll get full function of your leg.'"

Parsons made a return to the green and red fold in the dying stages of Mayo's All-Ireland semi-final defeat to Dublin last year, and acknowledges some people still talk to him about his injury.

"It is a distant memory but I suppose every now and then people will mention it and talk about the horrific injury that it was and it comes back to my mind.

"It was something that was just horrific. It's weird to say but it's something I wouldn't swap... the character-building, the relationships that I built, it was an incredible journey to come back and play to be honest."

"Maybe in times of adversity you realise who is in your close circles. [It was] incredible to have my wife Carol who is a physiotherapist, helping me out with rehab. I went to every single session in the Sports Surgery Clinic.

"Just your teammates as well, checking in on a weekly and monthly basis on progress, and your family. Ultimately it's the people around you that really help in times of adversity.

We’re all in this together. Strength is derived from unity. Let’s all do our part @HSELive @gaelicplayers @officialgaa #COVID-19 pic.twitter.com/pBuAG1efDb

"It started really basic, walking, resistance bands, leg lifts, and then it progressed to strength exercises in the gym, walking in the pool, to movement, to testing of basic plyometrics, jogging, there were so many different stages.

"I didn't focus on the end goal of coming back to play, I just had mini-goals. One of my coaches, Enda King, said 'Tom, just every Friday write down the [answer to the] question are you stronger this Friday than you were last Friday?' If that answer is yes every week then eventually you will get to the goal you want to get to."

One aspect that was crucial to Parsons' recuperation was the support of his employers, who allowed him time off work to recover.

"I was lucky too that I work with Jacobs Engineering, a fantastic company who supported me through this as well. I was seven months off work, because I couldn't work!

"I had three surgeries over a three-month period and I was wearing a leg brace. I did have time on my hands to... the challenge came when I returned to work and trying to balance the rehab with work and the whole work-life balance with sport as well."

Parsons the latest Mayo player to retire from inter-county football