Donegal’s COVID-19 rate has gone above 200 for the first time, while there have also been surges in the rates in Roscommon and Monaghan.

The latest figures from the Health Protection Surveillance Centre show that there were 204.2 confirmed cases of the virus for every 100,000 people in Donegal in the past two weeks.

Meanwhile, Roscommon has jumped from 83.7 yesterday to 99.2 today.

Dublin still has the second-highest rate in the country with a 14-day figure of 156. The rate in the capital has been slowly rising over the past seven days – rising from 140.3 this day last week. 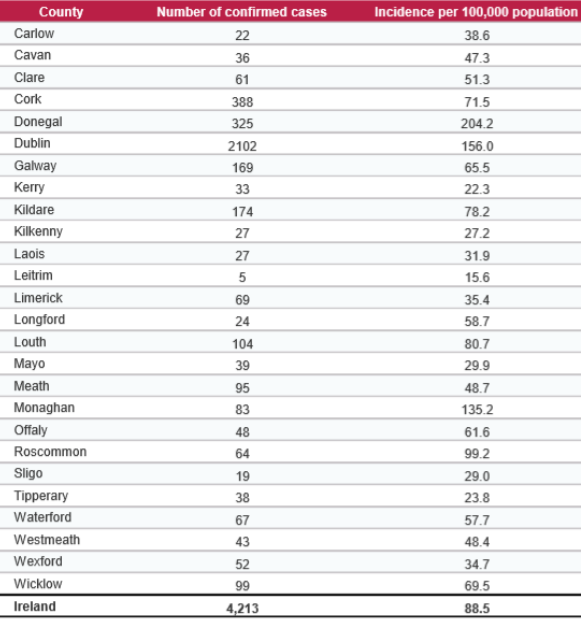 Speaking at the COVID-19 committee in the Dáil this morning, the acting Chief Medical Officer Dr Ronan Glynn said there is still not enough evidence to suggest the Level Three restrictions in Dublin could be reduced.

“I fully appreciate the need for certainty but what I would say is that the measures that were put in place last Friday week for Dublin would only be beginning to take effect yesterday, today and tomorrow.

“We do need to see a significant improvement over the coming days in Dublin. We have not seen it yet.”

📈 Days without fall in incidence rate

📉 Days without rise in incidence rate

Meanwhile Leitrim, which was up at 81.1 less than two weeks ago, now has the lowest rate in the country at 15.6. 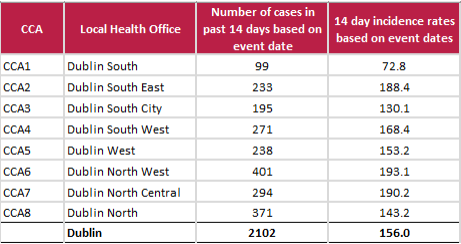 In the capital Dublin North West now has the highest virus rate at 193.1, followed closely by Dublin North Central and Dublin South East.

Dublin South still has the lowest levels in the county.

Minister Stephen Donnelly defending the turnaround times for testing in Ireland says it's good when compared to other countries. Says our capacity is also good and that some other countries "would bite your hand off" for that capacity

He said system capacity is good and some other countries "would bite your hand off" for a similar system.

He said the current county by county system of restriction levels is working and suggested officials would not be considering even more localised plans.