The world's longest flight has been successfully tested with 50 passengers and crew travelling non-stop for nearly 20 hours from New York to Sydney.

The Qantas flight travelled over 16 thousand kilometres in 19 hours and 16 minutes - touching down in Australia with fuel to spare.

The journey, on a new Boeing 787-9 Dreamliner, was an experiment to see how ultra-long-haul travel affects those on board including Irishman, Alan Joyce, who is CEO of Qantas.

It is part of Qantas’ ongoing quest to launch commercial flights between the east coast of Australia (Sydney, Melbourne and Brisbane) and New York and London. The direct flights would save passengers up to four hours in total travel time and follow the successful Perth-London route, which started in March 2018 and is the only direct link between Australia and Europe. 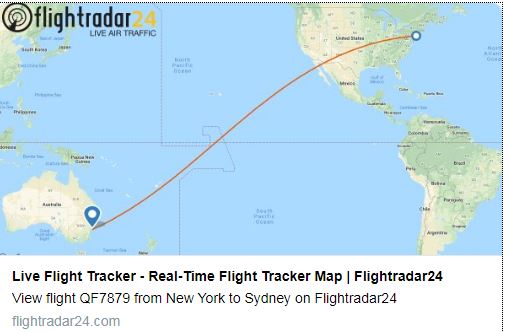 While not designed for the 16,200 kilometres (10,200 miles) journey from New York to Sydney, the 787-9 being used for today’s research flight will take off with maximum fuel and a restricted passenger and baggage load (and no cargo) to allow the aircraft to operate the flight non-stop. All carbon emissions from this flight, and two additional research flights from New York and London to Sydney in November and December will be offset.

Airbus and Boeing have pitched aircraft (the A350 and 777X respectively) with the range to operate Project Sunrise flights on a commercial basis. These pitches, together with findings from the research flights and other streams of work, will form part of a business case being developed by Qantas to inform a final yes/no decision on Project Sunrise expected by the end of this year. If approved, flights would start in 2022/23.

Today, our first ultra long haul #QantasResearchFlight has set off from #NewYork direct to #Sydney flying 50 people more than 16,200 km on a #QantasDreamliner. Read all the fast facts here: https://t.co/VX1OnukeN5

Unvaccinated People Will Not Be Allowed Into Electric Picnic