A hen in Co. Offaly - who holds a Guinness World Record - has sadly passed away.

Marmalade, who was world famous for her virility, produced over 180 chickens in her life.

She was also known to enjoy a pint of the black stuff too. 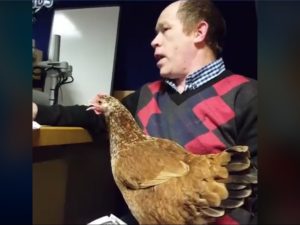 Marmalade passed away at the age of four and a half.

Owner John Dolan says he's planning on getting her stuffed, and displayed proudly on his kitchen wall:

We kind of nearly killed her with kindness, she was that well looked after. She was everything to us.