Fontaines DC are the band of the moment. This isn't hype, we have been there since day one and watched their hard work turn heads everywhere. The electric connection between Grian, Carlos, Curley, Deego and Tom, is a current we can all see and one that has the band poised for greatness.

It's one week until Debut album 'Dogrel' is released on Partisan records. The momentum leading up to the release on April 12th has seen the band play multiple venues across Europe, venture across the Atlantic to New York and make nine appearances in six days in Austin at SXSW.

"Fontaines DC were the most talked about band" at the SXSW industry showcase writes Alex Thomson in Gigwise,  "They make 2019 punk for a politically-motivated, geared up generation. Their songs do have a direct line to small town ears though, with lyrics that convey an aspiration to fight for better things. Their live performance is a magnetic riot at every turn. It’s hard to ignore."

Here they are (without Curley) in studio with Paul. 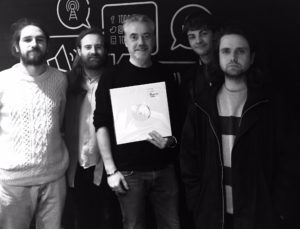 Back in 2017 they came in to record for The McLoone Sessions. Check that out here.

Here's a playlist of their song choices as part of the live radio show alongside their own songs.

When Will Vaccines Be Available And Who Should Get Them First?

Dublin Man Finds A Forgotten Box Of Fine Wines - But Are They Drinkable Or Is It Too Late?

When Will Vaccines Be Available And Who Should Get Them First?