Liverpool came from behind to secure a 2-1 win over Tottenham at Anfield to extend their lead at the top of the Premier League table back to six points.

Harry Kane had given Spurs the lead within the opening minute - heading past Alisson in the Liverpool goal after the ball had come back off the crossbar.

Jordan Henderson pulled one back for Jurgen Klopp's side in the 52nd minute - his first Premier League goal at Anfield since he netted against West Brom back in December 2015.

The result makes it twelve Anfield wins in a row for Liverpool.

Manchester United moved up to 7th in the Premier League table to continue the momentum from their 1-1 draw with Liverpool and 1-0 Europa League win against Partizan Belgrade in the last seven days.

They were 3-1 winners at struggling Norwich City this afternoon at Carrow Road.

The England international made up for it within a couple of minutes, doubling the lead.

Martial did eventually get on the scoresheet in the second-half to secure the win for the away side. 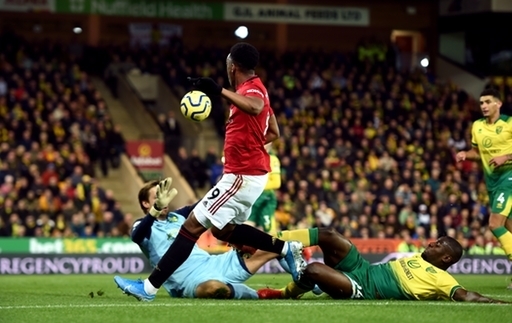 Arsenal surrendered a two-goal lead as they drew 2-all with Crystal Palace at the Emirates Stadium.

Unai Emery's Gunners had been looking to bounce back from Monday night's surprise defeat to Sheffield United at Bramall Lane.

Sokratis gave Arsenal the lead on seven minutes, and it was the Greek defender who thought he had won all three points for the home side late on.

However, VAR put paid to that with a seemingly hars call as Chambers was alleged to have fouled in the box.

Luka Milivojevic pulled a goal back for Palace in this London derby before half-time, and Jordan Ayew equalised on 52 minutes when he connected with James McArthur's cross.

Newcastle and Wolves played out a 1-1 draw in their Premier League fixture at St James Park.

Steve Bruce's side finished the game with ten men after Sean Longstaff was shown a straight red card for a late tackle.

Magpies captain Jamaal Lascelles put them ahead with a 37th-minute header.

Jonny Otto equalised with just over 15 minutes left to play and Nuno Espirito Santo's side go to 11th in the table with the point.

23 Water Supplies Had Above Allowable Limit Of Lead Last Year