And more of today's showbiz

Gwyneth has gone all out to get us talking about her new Netflix Show, The Goop Lab by posing in front of a big massive floral fanny. Should be called The Goop Lab(ia) harhar.

The series is set to premiere in its entirety tomorrow, January 24, with Gwyneth hosting each of the six episodes.

Chris O’Dowd and Ruth Negga will play husband and wife in an Apple TV aminated short called Earth Day. It’s out on April 17th and the storyline follows a 7-year old who learns about the wonders of the earth from his parents. It’s 36 minutes long and narrated by Meryl Streep.

Victoria Beckham is flogging a claret and blue jumper which is almost identical to West Ham's football kit.

Victoria describes the knit as “ideal for pairing with high waist skirts and trousers,” but it wouldn’t look out of place at the Hammers’ home in the London stadium. Victoria’s jumper costs 700 euro and is a alpaca wool mix. 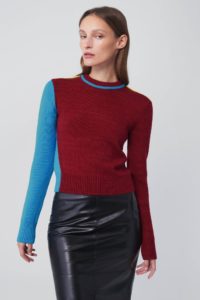 Ariana And Justin Say They Did Not Cheat

Get Creative With The Ian Dempsey Breakfast Show