Over 25,000 medical appointments have been cancelled today, as nurses take to the picket lines for a third day.

Their dispute with the government shows no sign of ending, with both sides holding firm on the issue of pay.

Day three of the nurses strike got underway at 8.00am, and once more over 25,000 appointments, including for outpatients and day surgeries have been cancelled.

Injury units are closed, as are day centres for older people and those with disabilities, while community nursing and respite admissions wont take place.

The HSE says its getting harder to reschedule the tens of thousands of appointments as the industrial action continues. 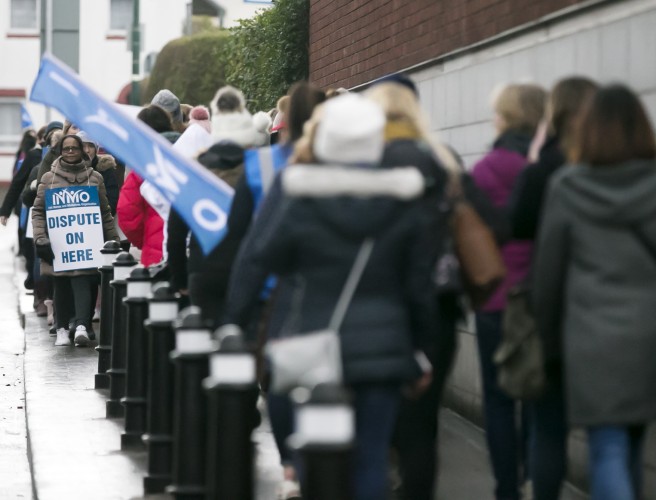 Nurses from the INMO trade union on the picket line outside Crumlin Children's Hospital in Dublin | Image: Sam Boal/RollingNews.ie

37,000 inmo members are taking to the picket lines in their row with the government over pay and staffing shortages.

They say addressing pay is the way to attract and keep nurses.

The Government says pay increases for nurses are included in the public sector pay agreement and conceding to the nurses demands would cost €300 million.

Both sides last met at the Labour Court a week and a half ago. It decided they were too far apart to intervene.

No talks have taken place since.

The nurses plan three consecutive days of strikes next week.

28 Flu-Related Deaths Have Been Reported Since October

Fresh Calls For Safezones Around Buildings Where Terminations Take Place