Teenagers Purposely Coughing On Passers By In Clontarf

An incident involving a group of teenagers, purposely coughing on pedestrians in Clontarf in Dublin, has been described as stupid and dangerous.

Susan Nutley, who is a nurse, says was surrounded while out for a run along the seafront on Monday evening, and stopped from being able to get by.

Gardaí say they're aware of social media reports of similar incidents, which they say could amount to an offence, and are urging people to report incidents to them. 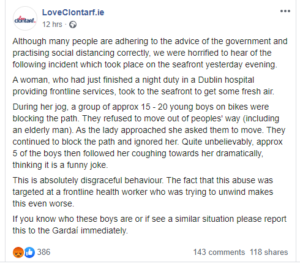 Gardai To Inspect Pubs Compliance Of Covid Guidelines From Tonight

Ryanair To Process 90% Of Flight Refunds By End Of July

Covid-19 Deaths May Have Been Overestimated According To HIQA