Thunberg Hits Back At Trump For Anger Management Comment

Greta Thunberg has hit back at Donald Trump after he accused the teenager of having an anger management problem.

Yesterday the 16-year-old was named Time magazine's person of the year, which did not go down very well with the United States President.

In fact, he claimed it was ridiculous that she became the youngest ever recipient of the honour:

So ridiculous. Greta must work on her Anger Management problem, then go to a good old fashioned movie with a friend! Chill Greta, Chill! https://t.co/M8ZtS8okzE

The magazine says she's offered a "moral clarion call" to those willing to act on the issue, and "hurled shame" on those who are not.

This afternoon, she's changed her Twitter bio in response to Trump's criticism: 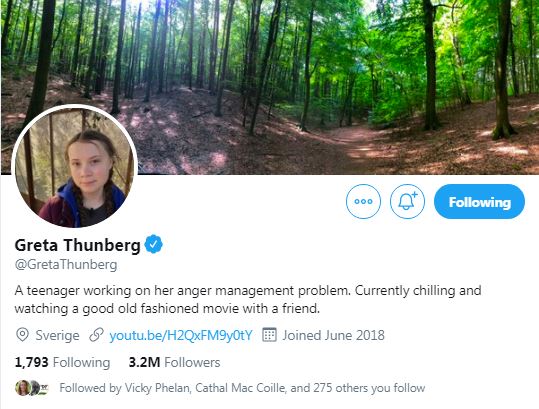 Government Plans To Have 70% Renewable Energy By 2030

Climate Change Will Affect 1 Billion By 2050