Two tiger cubs have been born at Dublin Zoo.

The Amur cubs were born in October, with news just coming of the new arrivals this week.

Tundra and Ussuri became first-time parents when the female cubs were born on October 14th.

At the time they weighed just 1.5kg.

In the space of just 3 months the cubs have grown rapidly to 15kg each.

The cubs are doing extremely well, Tundra is an exceptional first-time mother and she has shown strong maternal instincts from the very beginning. Both cubs are very playful and energetic, just like their mother!

Amur tigers are classified as an endangered species, with approximately 500 individuals believed to be living in the wild.

Dublin Zoo hopes that the two young females will later become part of an international breeding programme for the species and contribute to the low population numbers. 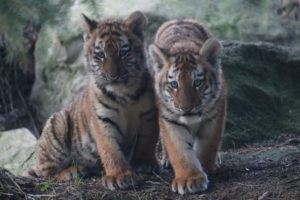