Campaigners in Waterford have taken to the streets to voice their anger over the Government’s response to the University Hospital Waterford mortuary revelations.

Pathologists at the hospital have twice warned that bodies are being allowed to decompose on trolleys in corridors and on the mortuary floor due to a lack of capacity.

The claims were contained in two letters from consultant pathologists to the South West Hospital Group.

This week, Leo Varadkar said there was no evidence to back up the claims; however, he has since said he regrets if his tone suggested he was discouraging whistleblowers.

Varadkar says he does regret if his tone suggested he was discouraging whistleblowers in the health service & he wasn’t calling any staff member dishonest. pic.twitter.com/Oh9iYmA7R7

Speaking last night, he twice refused to apologise for the comments but added: “The only thing I said in recent days is that there were different accounts.”

“I didn’t want to be calling any staff member dishonest.”

Demonstrators gathered in Waterford this afternoon to voice their anger at the Government’s response to the claims – and the ongoing national trolley crisis. 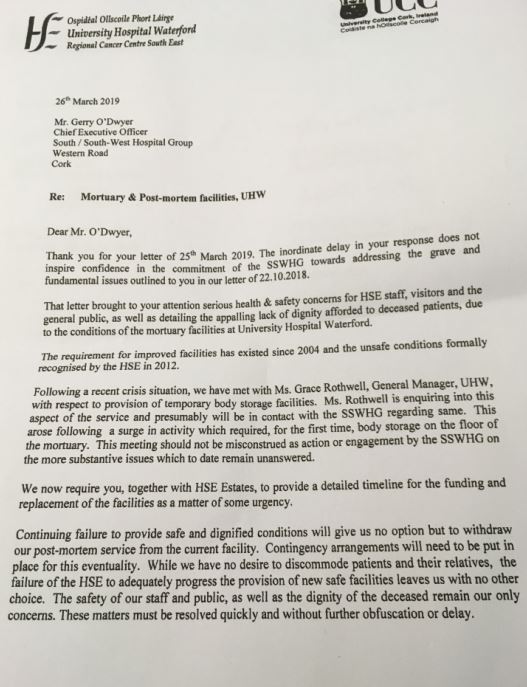 Still Waiting South East spokesperson Una Dunphy said people are angry over the Taoiseach’s decision to “put question marks over whether it was a true story or not.”

“We, as the public of Waterford, totally support our consultants in their dire situation at the moment,” she said.

“I think there was a little bit of a rollback on [the Taoiseach’s comments] but it wasn’t a sincere apology.

“So we want to say that we will stand over anybody who tries to whistle blow or tries to rectify a situation that is intolerable.”

In their first letter to the South West Hospital Group, the consultant’s warned that bodies were being left to decompose on trolleys in hospital corridors leading to “almost unspeakable” trauma for families who had lost loved ones.

The second letter, which came to light yesterday, said a “surge in activity” had seen bodies left to lie on floors in the mortuary.

State Pathologist's Office Will Not Use Waterford Mortuary "For Time Being"

Fresh Claims Bodies Being Stored On Floors At Waterford Mortuary