Stephen Bradley's decision to start Liam Scales and Lee Grace in the Shamrock Rovers back three proved to be a key part in winning the Dublin derby.

While Saturday's clash with second placed Bohemians may not have been a Premier Division title decider, the five point lead that Rovers earned with the 1-0 victory gives them some decent breathing space heading into the last eight matches of the season.

The vastly experienced Joey O'Brien has started the last six games for the Hoops but was named on the bench for the derby, so he was fit enough to play if called upon. The more mobile back three of Scales and Grace either side of Lopes, and with the assistance of wing backs Ronan Finn and match-winner Danny Lafferty, closed off the space that the Bohemians wingers normally like to run in to.

Bradley said after the match that O'Brien was carrying a knock but admitted that the change was also made to help nullify the main threat of the Gypsies attack, Danny Grant and Kris Twardek.

"We just knew that they'd just try hit us down the sides with Twardek and Grant. If you watch them, that's their biggest threat. They get wide and cross the ball and we knew that," said Bradley.

"The two of them are quick and direct and to be fair, we nullified it really well. I think Grant got in once in the first half but other than that, I don't think there was any times down the side that they got in. I thought we defended really well against that threat."

Roberto Lopes was given the man-of-the-match award for his performance at Tallaght Stadium in anchoring the back three which had to hold steady for over 85 minutes after Lafferty's early match-winning goal.

"Scales was fantastic. It could be anyone of us I thought," replied the Cape Verde international when it is suggested to him that Scales could have laid claim to the award.

"We knew were going to be up against it at times in the second-half. We had to dig in and just hold on to what we had. Scalesy's been excellent. Lee has been brilliant. Danny was different class." 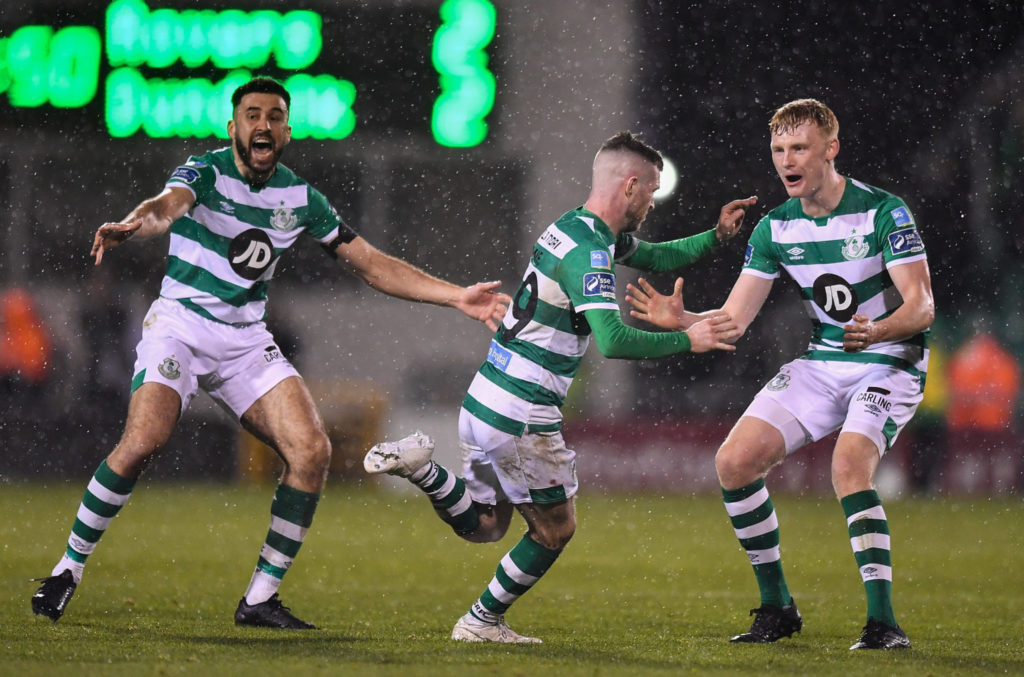 Going back to his days playing for his former club UCD, Scales has shown great promise and after a trial with Premier League club Manchester City last year, the 22-year-old looked set to move to Bristol Rovers before the League One club pulled the plug on the deal.

Republic of Ireland senior boss Stephen Kenny showed his appreciation for Scales, giving him five caps during his reign as under-21 boss and while the Wicklow native may have to bide his time for a couple more years, it would be no surprise to see him earn a senior call-up in the future.

Rovers signed him last November and he has made nine appearances for the club so far this season. Lopes explained what makes him such a good defender.

"He's mature beyond his years. I keep thinking he's 28 or 29 and been in the league years but he's not, he's such a young lad and he's still in the Irish under-21s," said Lopes.

"There's a level of composure that he brings to the team. I'd be screaming at him to head it and kick it and he's taking it down and he's stepping by people and he's passing it. It just goes to show what a good player he is but first and foremost he's a really good defender.

"You've seen how good Joey's been for us all season. Scalesy's come in and looked like he's played all season as well. He battles really hard. You could see it there today, he puts his body on the line as well and after that all his composure and his footballing qualities come out."