Chelsea line up friendlies with Bohemians and St. Pat's

Chelsea will begin their pre-season campaign with a pair of friendlies in Dublin. The Europa League...

Chelsea line up friendlies with Bohemians and St. Pat's

Chelsea will begin their pre-season campaign with a pair of friendlies in Dublin.

The Europa League winners have arranged a game with Bohemians at Dalymount Park on Wednesday July 10th. That will be followed by a meeting with St. Patrick's Athletic at Richmond Park on July 13th.

It's the second year in a row that the Londoners will have played in Dublin as part of their pre-season. Chelsea drew 1-1 with Arsenal in front of 46,002 at the Aviva Stadium in August of 2018, with Antonio Rudiger scoring their goal on that occasion.

Chelsea's last visit to the home of Irish football was in July of 1991 when they beat Bohemians 2-0. 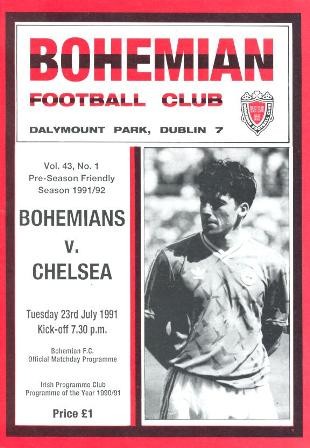 The pair of Dublin friendlies come just before Chelsea head to Japan where they'll play J League champions Kawasaki in Yokohama (July 19), and Barcelona in Saitama (July 23). Games with Reading at the Madejski and RB Salzburg will also come before they open their Premier League campaign away to Manchester United on August 11th.

Bohs have confirmed that tickets for the Chelsea friendly will cost €30 for adults, and €15 for under-13s.

It's over 10-years since a Chelsea XI drew 2-2 with Jeff Kenna's St. Pat's at Richmond Park. Tickets for the Inchicore game will cost the same as those at Dalymount.