It is quite unique for any new signing at an Irish province to be thrust straight into the cauldron...

It is quite unique for any new signing at an Irish province to be thrust straight into the cauldron of a derby match, never mind three derby matches.

One of Munster's new Springboks, Damien de Allende, has only played two matches since signing a two-year deal with the province in July, against Leinster and Connacht, and he will be facing the Blues again this Friday night when the arch-rivals clash in the Guinness PRO14 semi-finals at the Aviva Stadium.

So, is he up to speed with the Munster-Leinster rivalry yet?

"Yeah definitely! I think it's quite personal," said de Allende. "It's very similar to when I played with the Stormers and we played against the Bulls. It's like a north-south derby, it's very personal, it's very physical. It gets quite intense on the field, even though you have a massive amount of respect for each other.

"Obviously I'm not Irish but the guys are competing for squads to play for Ireland so they'll go all out in the game but they still have massive respect for each other on the pitch and off the pitch.

"I probably need to play a few more like the other guys have but I certainly do understand the way they see it and it's very encouraging and it makes me want to beat them as well which is quite nice." 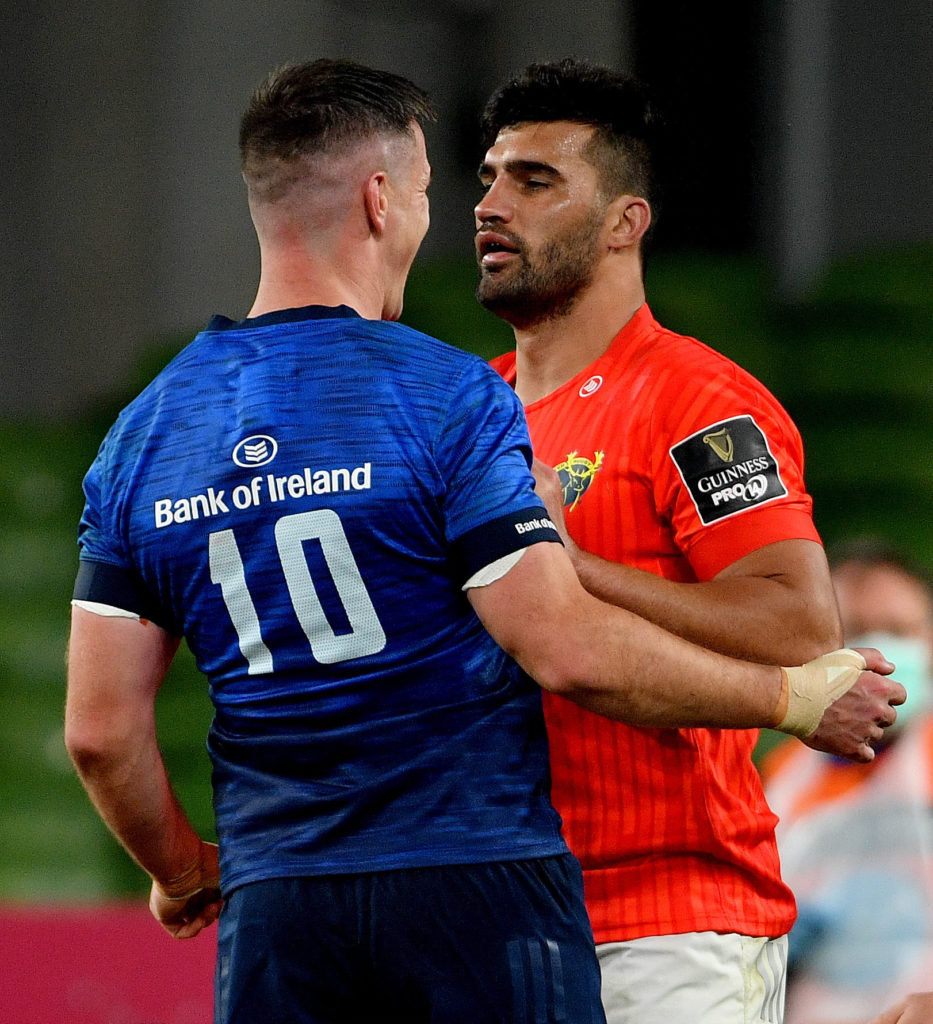 22 August 2020; Damian de Allende of Munster and Jonathan Sexton of Leinster during the Guinness PRO14 Round 14 match between Leinster and Munster at the Aviva Stadium in Dublin. Photo by Ramsey Cardy/Sportsfile

The men in red have been left feeling green with envy while peering over their neighbours' fence in recent times as the Blues won one of the two Heineken Champions Cup finals they appeared in over the last two years, while they have also won back-to-back PRO14 titles in that time.

Munster have failed to add any silverware to their collection since the 2010/11 league success and since then they have only reached two league finals but the 2019 World Cup winner believes the current Munster squad are on the verge of ending the drought.

"For me personally, no matter where I play, I always strive to win tournaments and championships so I signed for Munster because I feel that they have the credentials and the coaching staff and the players and the heart," said de Allende.

"From what I've watched on TV, obviously I have only played two games here, but I feel they have that team environment that they actually want to achieve. You could go to another squad that have all the names and all the stars in their team but it's like they don't want that success, or maybe not to want it is the right [phrase], but not working for that success.

Leinster have had one extra day's rest for the last-four clash on Friday at the Aviva Stadium, having played against Ulster last Saturday while Munster's win against Connacht took place at the Dublin venue the following day.

The 28-year-old centre is confident that they will be able to get themselves up for another shot at the champions.

"Friday night is going to be a very tough encounter but hopefully we will pitch up. It's a short turnaround but we know it's just a mental thing," added de Allende.

"We haven't played a lot of rugby over the past six months so there is going to be a few sore bodies I think still on Thursday night but if we get the right mindset and we pitch up on Friday night knowing that we've got one opportunity and forgetting about everything else in the past and not even worrying about the final. Just staying in that moment for eight minutes and hopefully we can walk off with big smiles on our faces on Friday night."

RG Snyman in line to make Munster return next month