Republic of Ireland under-21 striker Adam Idah is poised to make his first Premier League start for...

Republic of Ireland under-21 striker Adam Idah is poised to make his first Premier League start for Norwich City at Old Trafford.

The Corkman remains the Canaries' only fit striker with an injury crisis biting hard at the Norfolk club.

Norwich sit bottom of the table and 7-points from safety ahead of Saturday's meeting with Manchester United.

They remain without top-scorer Teemu Pukki after he sustained a hamstring injury in their New Year's Day draw with Crystal Palace.

The Finland international has scored nine goals in his 21 Premier League appearances to date.

Norwich boss Daniel Farke says Swiss striker Josip Drmić is working his way back to fitness following a hamstring problem of his own, but won't be available for the game at Old Trafford, "He joined us for the first time since his long-term injury during this week in order to take part.

"[He managed] a few exercises during this week but it's too soon for him to take part."

Regarding Pukki's return, Farke told his pre-match press conference, "I hope at any point during next week he'll join us back in team training and I'm pretty confident he'll be available during the Bournemouth game."

So, whither FA Cup hat-trick hero Idah? Republic of Ireland assistant manager Terry Connor is set to be at Old Trafford to watch Idah following his heroics at Deepdale last week.

Mick McCarthy said in the wake of that 3rd round tie that Idah may well force himself into his plans for Ireland's Euro 2020 playoff with Slovakia in March, but Farke appears keen not to pile the pressure on the 18-year old.

"We will see. We are struggling a bit of course with injuries of our main striker options with Teemu Pukki and Josip Drmić", Farke said on Friday.

"Of course, Adam Idah is a good option for us without any doubt. He's done really alright at Preston in the [FA] Cup game and we'll see how we decide."

The German was keen to point out that it wasn't so long ago - namely their Carabao Cup exit to Crawley Town - that some were writing off Idah's ability to step into the first team, "Please be careful with these young lads - we can't be too high and we can't be too down.

"After Crawley when he played and there was an own goal and we lost this game, everyone labelled him as 'too far away from the Premier League' and we supported him and backed him." 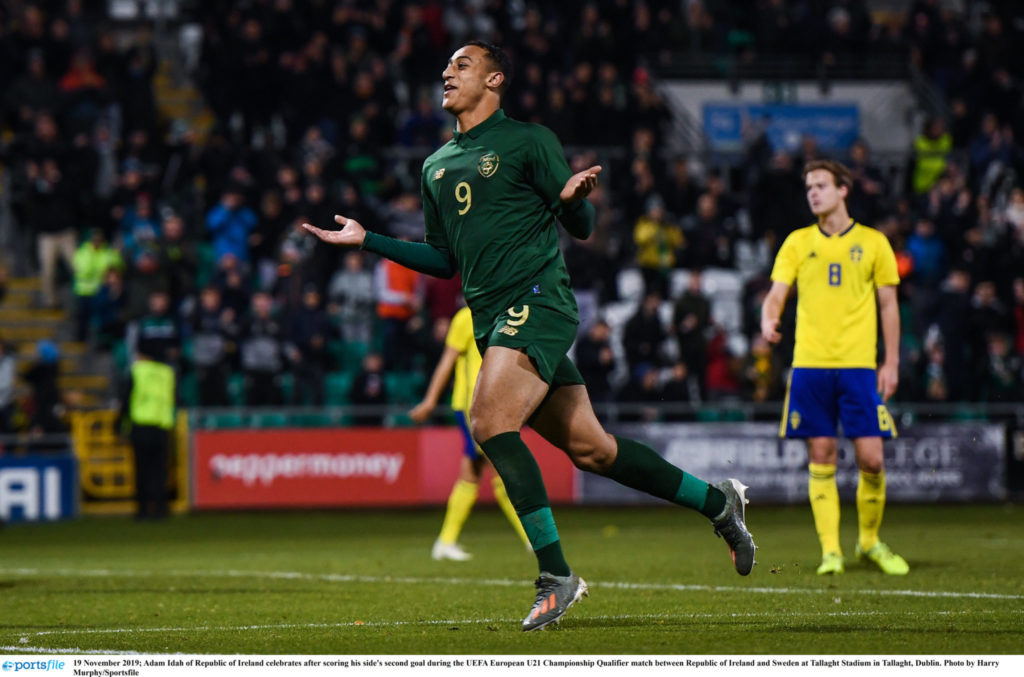 Farke played a similar game prior to the Preston match, pointing out to that point Idah had only made the most brief of Premier League cameos, but naturally that Deepdale performace alters expectations, "Without a doubt it was a good game [from] him, but I don't like the hype too much.

"It was his first game [at] this level. His performance was definitely OK, without any doubt, and I was pleased with him but it's not like we won the Premier League title.

"With all respect to Preston, but we played a Championship side who has had several changes in their defence.

"Still a good performance because it's a Championship side with the best home record, but all respect to the Preston players it's a bit different when you play Lindelof or Maguire or whoever plays them tomorrow."

Farke would like to see more performances like the Preston game come from Idah before he can see the Corkman as Pukki or Drmić's equal, "Quality is always defined by performance over long-term periods, and this is what Adam has to do.

"We can't label him right now a top-class quality striker after just one FA Cup game. He has two-minutes at Premier League level, he looked sharp in those two-minutes but that's all.

"Don't over-interpret this performance. I was pleased for him, without a doubt [it was] good for his confidence.

"Also, good for us to be able to see he can deliver at this level, but I'm sure Manchester United is also a different level.

"He has to work quite hard, I also realised in the last game many many topics where he has to improve.