'A dream for every gymnast' | Rhys McClenaghan on Olympics, psychology, and time at home

Irish international gymnast Rhys McClenaghan has spoken of his disppointment at the postponement of...

'A dream for every gymnast' | Rhys McClenaghan on Olympics, psychology, and time at home

Irish international gymnast Rhys McClenaghan has spoken of his disppointment at the postponement of the Tokyo 2020 Olympics, but says he will have more time to prepare for a gold medal attempt next summer.

The ongoing coronavirus outbreak has led to the tournament being moved for the first time in it history.

McClenaghan, who was fancied for a medal at the Games, is spending these weeks of quarantine now at home in Newtownards in County Down.

"If the sun stays I can bring my old pommel horse out in the back garden, and then go for wee runs, do body-weight exercises. There's more than you think you can do.

"I flipped my mindset on the day, when I found out the Olympic Games were going to be postponed. I had to flip my mindset to the Olympics not being the next target. You can't focus on that now when it's so far away. Right now it doesn't feel like real life."

McClenaghan, who turns 21 this coming July, says a top target for any gymnast is to get a difficult move named after them.

"I want to come out of the Tokyo 2021 Games with a gold medal. Time is on our side now, so that's a positive.

"I don't see why I can't do it one year delayed. It gives us more time to work on potential upgrades, new skills, maybe even develop my own skill, 'The McClenaghan', who knows!

"I can't describe it in case there are other world-class gymnasts listening here that might steal it!

"It's a dream for every gymnast to have their name in the code of points... to have the most difficult skill would be a statement to say the least.

"Pretty much every skill has a name attached to it... growing up you're saying these names in training. You need to do it at a major championship and complete the skill, submit it, the judges then have a review of the skill and value it... and then get it verified. 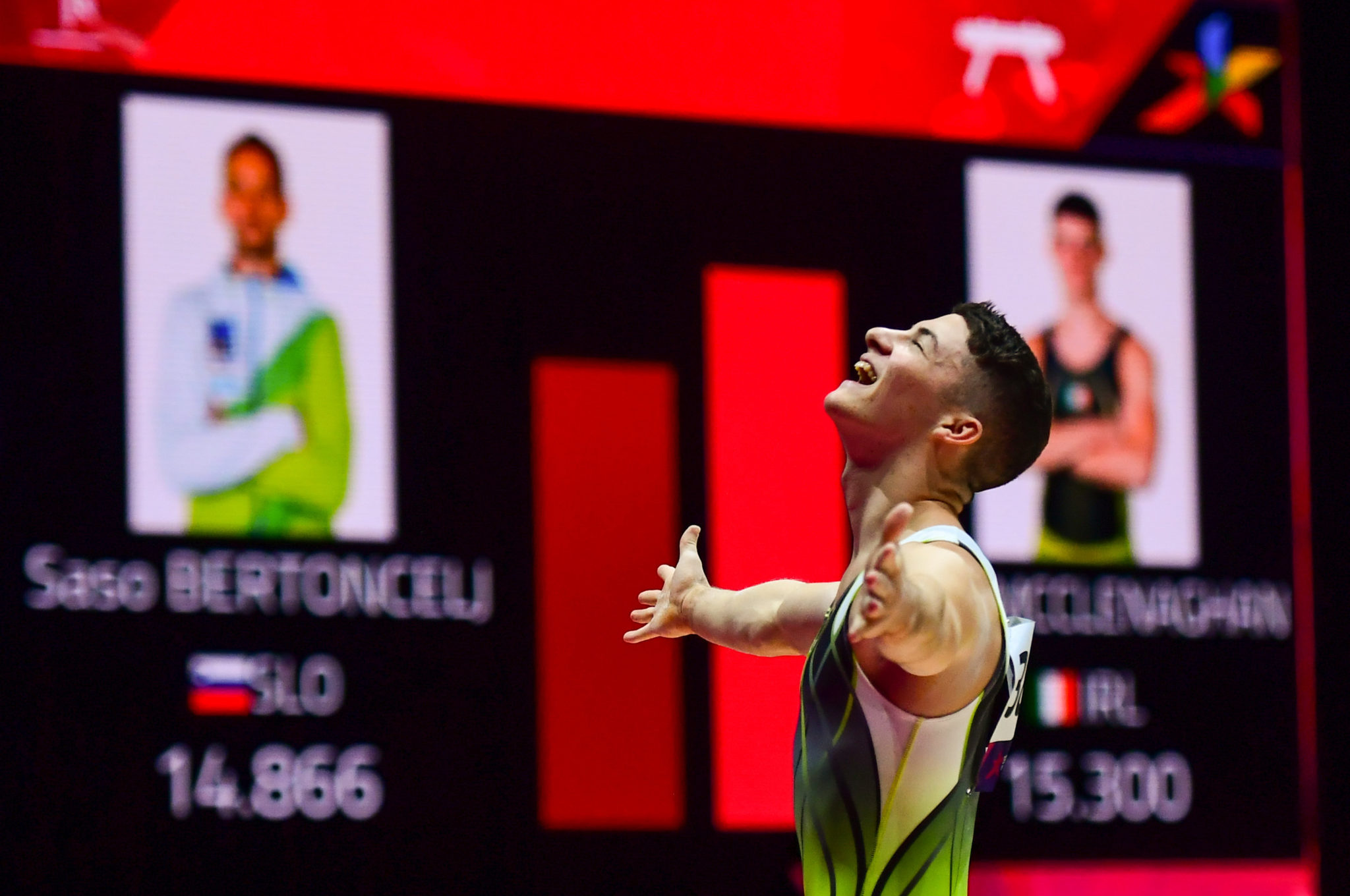 12 August 2018; Rhys McClenaghan of Ireland reacts after winning the gold medal on the Pommel Horse in the Senior Men's Gymnastics final during day eleven of the 2018 European Championships in Glasgow, Scotland. Photo by David Fitzgerald/Sportsfile

"You want to balance the difficulty score and the execution score, they're the two scores the judges go off. These are all the things the judges are looking for."

Confidence is crucial in any top-level sport, and Rhys told Nathan Murphy tonight that he has taken advice from a number of other sportspeople.

"Louis Smith, a four-time Olympic medalist and his speciality was the pommel horse. He's one of the first people that told me that confidence was one of the most powerful things in gymnastics.

"He had that confidence oozing out of him and everybody could see it. It's something when I watched on TV I could see straight away too.

"My second favourite sport would be boxing. I watch a lot of boxing... I see how confidence affects not only their competing but their training.

"It pumps them up, it gets them motivated. That confidence is a very powerful thing to have."

Olympics Postponed until 2021... The vision stays the same 🥇 pic.twitter.com/XPDvP4h1sC

McClenaghan is the most decorated gymnast in Irish history, having picked up a bronze medal in the World Championships back in October on the pommel horse.

He says availing of a psychologist has been a great help in keeping his mental health in check after career-defining moments like that.

"I talked with a lot of the boxers. I talked with John Conlan, who is Michael Conlan's dad of course. He's coaching the boxing squad and I'd pick his brain, I love sitting down and talking with him.

"I've been with a psychologist for the past two years now. There are so many issues that arise in life in general and in the sporting world that take you by surprise as well.

"After the World Championships there was actually quite a dip in my personality. I was moody, I was just not myself... that took me by surprise.

"You've just achieved one of your life dreams... and you come back home to training as normal, that was quite a shock to the system.

"So it was good to have somebody there I could talk to and vent with, and for them to understand the challenges I was going through."

Simone Biles explains being cleared to take bronze on the beam