After eight rounds of matches this season, Republic of Ireland international Enda Stevens has been clocked as the second-fastest player in the Premier League.

The 29-year-old Dubliner has recorded a top speed of 35.99 kmh (22.36 mph) while in action for Sheffield United this season.

With a top speed of 22.36 mph, Enda Stevens has ranked as the 2nd fastest footballer in the #PL 🔥

Stevens is only edged out of top spot by Manchester United striker Marcus Rashford.

Rashford, who scored the opener in the big clash with Liverpool at Old Trafford on Sunday, has run a fastest speed of 36.32 kmh, just 0.33 kmh faster than Stevens.

Interestingly the two fastest players are joined in the top four by team-mates. 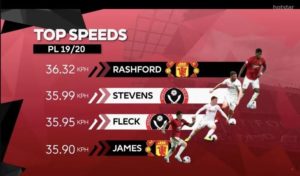 Stevens should be in action on Monday night as Sheffield United host top-four hopefuls Arsenal at Bramall Lane.

The former Shamrock Rovers full back is expected to start alongside fellow Irish internationals John Egan and Callum Robinson who all featured in the recent Euro 2020 qualifier against Switzerland.

The fourth Irish player in the United squad, David McGoldrick, has missed the last four matches for the club with a groin injury but manager Chris Wilder has said that he will give the striker every opportunity to prove his fitness ahead of the 8pm kick-off on Monday night.

A win for the home team could see them climb as high as eighth in the table and Wilder is relishing the chance to try and beat the Gunners.

"Arsenal are a historic, iconic club and it is another brilliant fixture for us.

"I thought we played well against Liverpool but we need to pick up something from the game this time and we believe we can do that. We went after Liverpool when we could and picked our times, and we will do that against Arsenal."

Paul O'Donovan 'pound for pound the best rower in the world'