FAI Accounts: 'The Board as a collective did not do its job well' - Donal Conway

The FAI Accounts press conference today has revealed the Association has current net liabilities of over €55 million.

Meanwhile, the Aviva Stadium will be moved onto a 15-year normal mortgage - which means its FAI debts won’t be paid off until 2034, not 2020 as previously stated by former CEO John Delaney as recently as last year.

Delaney's settlement package from the FAI was also announced as being €462,000 - a figure he received in September of this year. €372,000 of that figure was towards the Waterford man's pension fund.

The accounts have also revealed the severance payment for the former Republic of Ireland management team, led by Martin O'Neill and Roy Keane, amounted to €1,903,277.

Another revelation from today's press conference was that the FAI auditors Deloitte were unable to declare the Association as a "going concern".

In the Deloitte section of today's release, the auditors acknowledged the Association's financial situation was getting worse.

"Therefore we were unable to obtain sufficient audit evidence to support the assumption that the company will continue as a going concern." 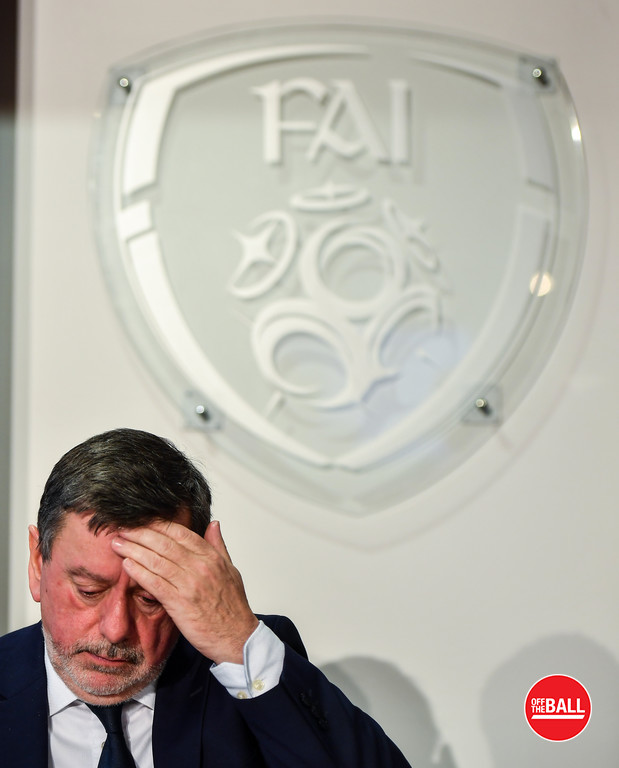 Fine Gael TD Noel Rock, who is a member of the Oireachtas Committee on Transport, Tourism, and Sport has said it is a dark day for football in Ireland.

“These accounts published today display huge debt burdens and come against the backdrop of the FAI losing its most lucrative commercial contract. It is a dark time for the administration of football in Ireland.

“There are numerous questions now that have to be answered about their financial obligations, commercial arrangements and how they intend to continue to function.

“Deloitte clearly decline to state that it is a going concern. This is a significant development as it will mean the FAI will find it difficult to obtain refinancing for its existing debt obligations. This is a concerning development for football fans. Answers and leadership are urgently needed.

“The hard-working staff, FAI coaches and volunteers across the country have been treated shambolically with this. Professional and diligent employees working for the better of Irish football have been left wondering about their livelihoods. It is simply not good enough and cannot be accepted at any level."

Sinn Féin Spokesperson on Sport, Jonathan O'Brien is also a member of the Oireachtas Committee, and he added his frustration at today's news.

“The auditors were unable determine [sic] whether adequate accounting records have been kept and were unable to report if, in their opinion, the disclosure of directors’ remuneration and transactions specified by law were made.

“All of this is an indictment of the former CEO John Delaney and makes a mockery of his repeated claims that the association would be debt free by 2020.

“Ordinary football fans across the country will also be gobsmacked at the severance package of €462,000 paid out to John Delaney.

“This is a bleak day for Irish football and all those fans who spend their hard-earned money to follow clubs and the National side year in, year out.

“If there are to be job losses at the association then it needs to begin with those who are responsible for this mess rather than those who work tirelessly behind the scenes to promote Irish football every day.”

UEFA taking coronavirus seriously but confident Euro 2020 will go ahead

FAI won't clear debts until beyond 2030