Frankie Dettori has confirmed that he will ride for Aidan O'Brien in the 2000 Guineas at Newmarket next weekend.

The first Classic of the season has 15 entries left standing and O'Brien, who has won the race ten times including the last three runnings, has four of the 15 potential runners.

Dettori confirmed O'Brien has been in touch, but the little Italian does not ride the Ballydoyle first string, he'll take what Ryan Moore does not. 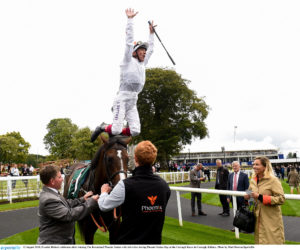 "Aidan has been in touch," Dettori told the Racing Post, "and I'll be riding for Ballydoyle in the 2,000 Guineas.

"Ryan [Moore] obviously has first choice but I'm standing by for one of the others and I'm excited about it."

The shortest-priced of the remaining Ballydoyle runners is Coventry Stakes winner Arizona, who is the general 6-1 second favourite,

"He's a Coventry winner who got home well that day," explained O'Brien at a recent press call.

"He's by No Nay Never, who would be an influence for speed, but we always thought a mile was going to be well within his grasp.

"Sometimes you would run a horse over a trip, looking at them with one eye open thinking it wasn't going to happen in terms of staying, but we always thought this horse would get the trip."

Wichita, New World Tapestry, and Royal Dornoch are the potential mounts Dettori will have to pick from, but the entire field will be hard-pressed to get the better of hot favourite and champion juvenile, Pinatubo.

The Roger Charlton trained Quadrilateral tops the market for the 1000 Guineas, Aidan O'Brien has three left in 17 five day declarations, the affectionately named, Love, Peaceful and So Wonderful.