The GAA has today launched a major initiative which focuses on the victims of the Bloody Sunday atta...

The GAA has today launched a major initiative which focuses on the victims of the Bloody Sunday attack at Croke Park in 1920.

14 people lost their lives in the attack by British forces on 21 November that year during a football match between Dublin and Tipperary.

A series of projects dedicated to the lost lives in the run up to the centenary commemoration next November have been announced.

A companion to the programme of events planned for the GAA Museum at Croke Park, this B100dy Sunday – The GAA Remembers series will tell the story in a new way and bring it to a broad and digital-native audience as the Association pays tribute to the memory of the 14 people who went to a match and never came home.

"Behind the history and the headlines of the Crown Forces attack on Croke Park in 1920 is a human story and a human tragedy," said GAA President John Horan at today's launch. "The appalling events of that Bloody Sunday changed the GAA and forever altered our relationship with the pitch at Jones’s Road.

“"How a place envisaged to be a home of unconfined joy was turned into a scene of carnage and horror is a tragedy that will never be forgotten. To honour those who went to a match and never came home we need to remember them, to pay our respects, and that is what we intend to do." 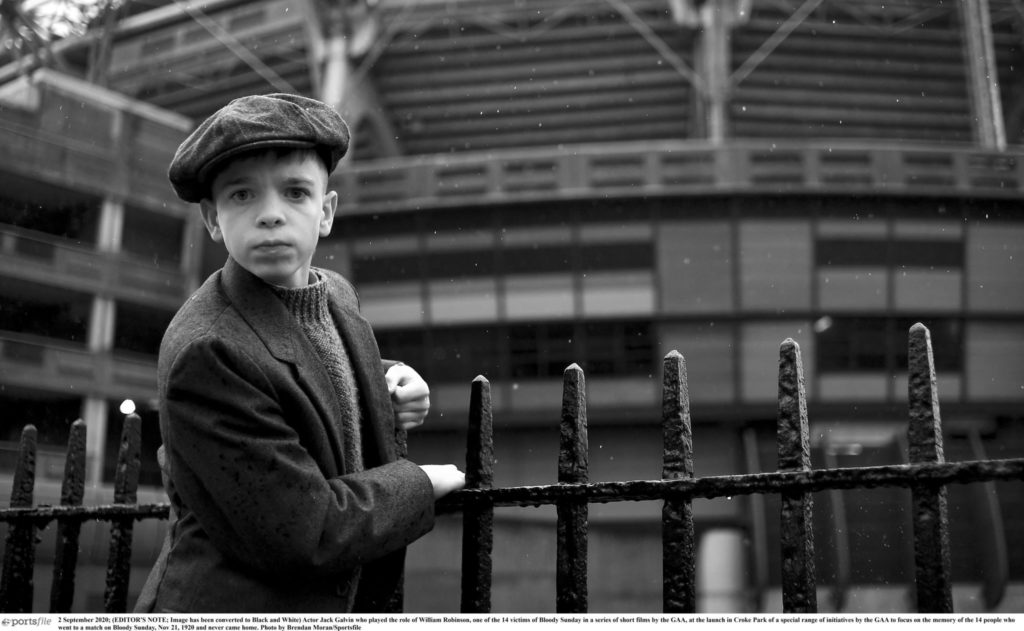 2 September 2020; (EDITOR'S NOTE; Image has been converted to Black and White) Actor Jack Galvin who played the role of William Robinson, one of the 14 victims of Bloody Sunday in a series of short films by the GAA, at the launch in Croke Park of a special range of initiatives by the GAA to focus on the memory of the 14 people who went to a match on Bloody Sunday, Nov 21, 1920 and never came home. Photo by Brendan Moran/Sportsfile

A collection of specially commissioned videos focusing on the victims killed 100 years ago at a Dublin v Tipperary football match begins online today and will run over the next 10 weeks, starting with the profiling of Dubliner Jane Boyle, who died in the crowd at Croke Park a few days short of what should have been her wedding day.

The videos have been set to music entitled More Than A Game; a piece commissioned by the GAA from the renowned Irish musician Colm Mac Con Iomaire. A new section dedicated to Bloody Sunday has been launched on GAA.ie and will shortly also feature a free podcast for download provided by Michael Foley, journalist, and best-selling author of the account of these tragic events, The Bloodied Field.