Giovagnoli urges Dundalk to be "brave" against Arsenal at the Emirates

Dundalk head-coach Filippo Giovagnoli wants his team to use the ball constructively when they face Arsenal in the group stages of the Europa League tomorrow night.

The Lilywhites trained in North London this evening ahead of a clash which their coach has described as a lightweight against a heavyweight.

“They will need to face the opponent, be brave and put in our style," the Italian said at his pre-match press conference. "We come here to play and not just to defend and stay behind the ball. Maybe they score against us and we arrive at the end of the game suffering.

"You can have fun performing, you can have fun challenging the opponent. It’s not just about the result. It’s about applying what we do in practice and what we try to prepare for the game. This is how you have fun, how you enjoy the game. It’s not only the end result. Not only this at all.

"This is like a heavyweight boxer against a super lightweight. We have to try and make them uncomfortable a little bit. Everything about this game is obvious. The difference in quality is obvious so let’s make the passion something bigger on our side 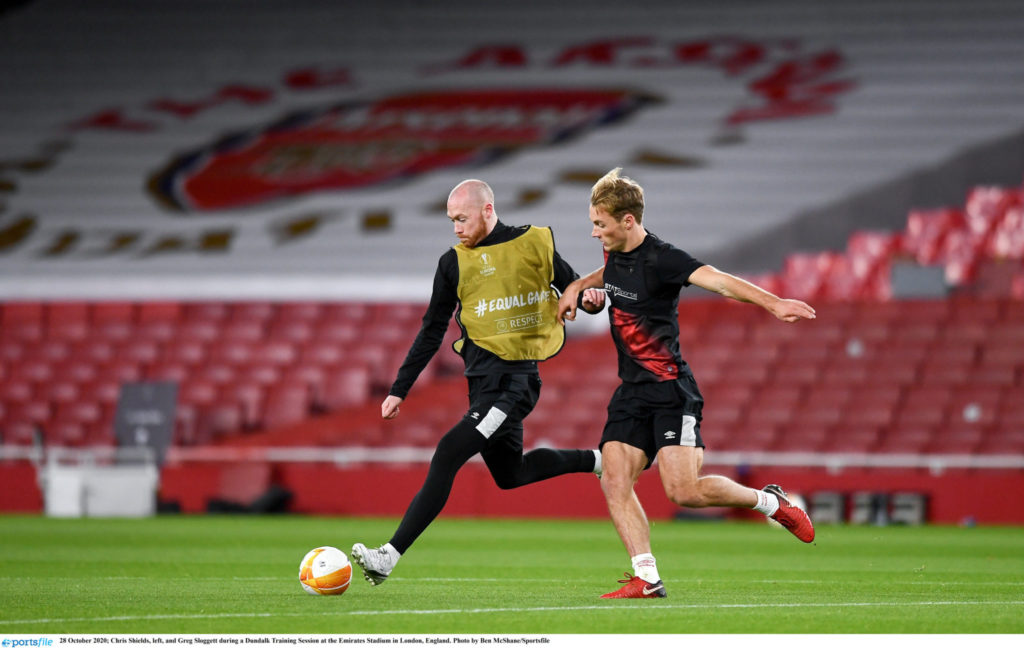 28 October 2020; Chris Shields, left, and Greg Sloggett during a Dundalk Training Session at the Emirates Stadium in London, England. Photo by Ben McShane/Sportsfile

Giovagnoli also spoke of his admiration for Arsenal legend and the Gunners' ex head of youth development Liam Brady, who he is spoking to speak to tonight.

"We have a mutual friend that connected us and he was really nice with me. He was one of my idols when I was young. He was playing with Juventus. It was really nice to talk to him a few weeks ago. He's a really nice person.

"It was before the draw for the group stages. We didn't know we were playing against Arsenal. He quite honestly told me that he doesn't know much about Irish football. Then he said, 'let's talk later if you want some advice about English football or whatever'.

"I'm going to try to call him tonight. I would love to meet him as soon as possible."

Arteta to assess Ozil's status at Arsenal after the transfer window