If there's any championship - club should come first | Alan Hubbard

If there's any championship - club should come first | Alan Hubbard

Former Dublin defender Alan Hubbard supports GAA president John Horan's intention to prioritise the club game when there is a return to action.

The Ballymun Kickhams senior footballer went even further in stating his desire to see this year's club championship given the green light ahead of any inter-county action, if there is an opportunity to play matches.

However, Hubbard admits that any talk of teams clashing on the field pales into insignificance when you consider the logistics of even just getting back to club training.

"I think [Horan] has put a lot of emphasis on trying to get the club back first and foremost," Hubbard told Off The Ball before pondering the issues that clubs face in contemplating a return.

"It looks very hard at the minute, when are we going to get back? Even talk of training and collective training, it looks like it will be a bit further down the road.

"Especially as we are not professionals, we won't be self-isolating and we will be mixing.

"It's probably hard to determine how club football will look a couple of months down the line. Will it be a possibility unless there is a vaccine found? That could be months and months away.

"We're not professionals who can hole up in a hotel and stay together. We're going to be meeting family and friends who might be prone to catching it.

"If it's passed on in club training, what happens if you catch it and you give it to your team-mates? Where does that leave you if you have matches and training and you all have to self-isolate?

"It is going to be very hard to start up."

The government caught the GAA on the hop somewhat by revealing in the Roadmap for Reopening Society last Friday that there could be non-contact training for small groups by early June.

By 20 July, collective training would be permitted but Hubbard believes that could still pose a risk for players.

"I could see small groups maybe getting back together, keeping social distancing, but getting back collectively as 25 players who are working, some people on the frontline.

"If the illness hasn't completely gone away, the likelihood of someone who is a doctor or on the frontline bringing it up to your training session.

"You'll probably have to bring your own kit with you but you're still wearing jerseys and the likelihood you could pick up someone else's water bottle, there's sweat, you're passing balls, gloves and bibs, all these sorts of things, you could easily give it to someone else.

"It might be a bit early. The numbers are going down thankfully and we're only in the middle of May now so you wouldn't know, in a month's time the numbers could come down massively by then.

"We'll just have to see in the next couple of weeks how this social distancing and the reopening phase one and two evolves." 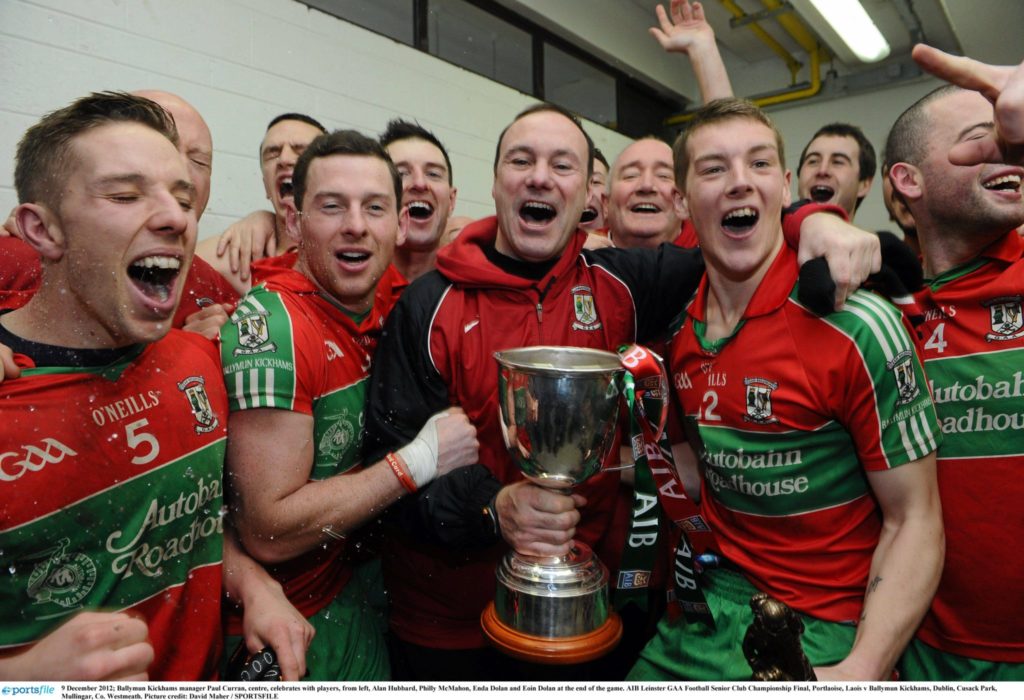 The Dublin county board announced in mid-March that all grades of club championship games fixed for April were postponed and that it would be engaging with the Leinster Council and National Competitions Control Committee to discuss restructuring if the pandemic went beyond April.

Ballymun Kickhams were drawn in a group with Thomas Davis, Round Tower Lusk and Skerries Harps for this year's Dublin Senior Football Championship but Hubbard is pessimistic over the chances of it going ahead.

"I personally can't see how a club championship will go ahead at the end of the year," he added while suggesting that it might not be possible for club or inter-county matches to restart until a vaccine for COVID-19 is found.

What of the suggestion that senior inter-county championship matches could be played behind closed doors?

Hubbard sees no difference regarding the risk of inter-county players catching and spreading the disease in their communities.

The idea of playing two championships in 2021 was floated by the GAA last week but the Kickhams defender is irked by that suggestion.

"Well if they talk about [playing] two championships, where does that leave the club champioship?" said Hubbard.

"We can barely fit in a club championship as it is because the way, sometimes, the championship is run is very awkward for clubs. Especially in Dublin.

"What we do is, we're in a group stage at the minute and we play two championship matches by April when the National League finishes and then we play the last one in September when the championship is over.

"Then if you get out of the group stage you compete then in the quarter-final.

"So where would that leave us, it won't be possible in April [2021] to play the matches?

"If we're told that there's no club championship until the end of the year and it's all being crammed in, it'll leave us very isolated and [club players] will feel hard done by.

"We want to get back as well just as much as they do. So I think the club championship is, first and foremost, more important to get back if you could fit it in.

"I just don't see how it could be done, unless they scrap the National League and the O'Byrne Cup but teams will want preparation and everything like that. I just don't know how that would work."