Iker Casillas has suffered a heart attack while training with his club, Porto. The 37-year old Spani...

Iker Casillas has suffered a heart attack while training with his club, Porto.

The 37-year old Spanish goalkeeper was rushed to Porto's CUF Hospital this morning, but the club say he is out of danger and in a stable condition.

Porto confirmed the news this afternoon:

The work session was promptly interrupted to provide assistance to the FC Porto goalkeeper, who is currently at the Hospital CUF Porto. Casillas is well, stable and his heart problem solved.

Casillas' last game was on Friday last, when he played the full 90-minutes of Porto's 2-2 draw with Rio Ave. The 2010 World Cup-winner had recently renewed his contract with the Primeira Liga champions, which would see him remain with the club past his 40th birthday. He said at the time of that contract extension that he'd like to finish his career with Porto.

A product of Real Madrid's youth system, Casillas was introduced to their first team squad at the age of 16, and in 1999 became the youngest goalkeeper to play in the Champions League, when he started between the posts in their group game against Olympiakos.

That season, Casillas would help Real win an eighth Champions League when a Steve McManaman-inspired display helped them beat Valencia in Paris. 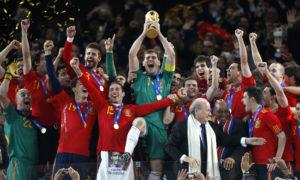 He'd go on to win a further two Champions League titles with Real, before leaving for Porto in the summer of 2015. Since joining the Portuguese giants, he's gone on to make 156 appearances for the club.

Casillas captained Spain when they won their first ever World Cup in 2010 following an extra-time victory over the Netherlands in South Africa. The last of his 167 international caps came in Spain's last-16 exit to Italy at Euro 2016, but he hadn't ruled out a return to Luis Enrique's squad.