Painting the Portrait of a Fighter | Dylan Logan

By Sathishaa Mohan, with Leona Kenny

Backstage at the 3Arena last February, after watching a Mixed Martial Arts fight come to an end, I reached for my camera and captured my first sports portrait photograph – a mesmerising flicker of a fighter at his lowest ebb.

The photo is of Dylan Logan. He’s speaking to the press just after he was beaten in a sold-out MMA bout on home ground - the bruises and cuts are still fresh on his face.

Now on show at the National Gallery of Ireland, this image froze the fighter at a dark moment – a devastating loss that threatened to curtail his career as one of the promising stars of the sport.

Logan is 25 now and reckons that the image, taken after he lost by submission, portrays the agony of that loss.

"To put everything into this fight and then come up short was really heart-breaking. The photo captures that," he says.

To understand what you can see in this portrait, we’ve painted his story for you.

The origins of this portrait began on the streets of Clondalkin.

Dylan Logan grew up in this west-side Dublin town, about 12km outside the city-centre. He remembers it being an unpredictable place for a young boy.

"There were a lot of kids up to no good and there were older kids wrecking the estate. You would hear gunshots around the corner from home and that wasn't just once. The crazy thing is, the kids in the neighbourhood would be laughing. My ma and da didn’t want that to be the environment they brought up their kids in."

Dylan’s Dad, Michael, is from Dolphin’s Barn. Tucked away into Dublin’s inner city; 'fairly rough' was how Michael put it, when asked to describe the place he grew up in. Seeing those similarities with Clondalkin, he made the decision with his wife to move their young family out to Newbridge, Co. Kildare.

"We have everything we want here now. It’s nice, it’s quiet. We’ve a big house. And the boys are safe. Sure, that’s all you really want," he adds.

Dylan spent 13 years in Clondalkin, and during that time he trained in karate. He took lessons at Bawnogue Kenpo club a few minutes from home. Karate ran in the family; the coach Andy Taylor had also taught his father in the combat sport.

Michael recalled: "As a kid I was bullied, so my own father took me to karate to learn how to defend myself – after maybe a year, to a year and a half, nobody was picking on me anymore."

Like his father before him, and not wanting his sons to become victims of bullying, Michael signed them up at an early age to learn how to defend themselves.

Michael explained: "I wasn’t really pushing them whether they were going to compete or anything like that. It was just to have that set of skills that if someone was attacking them on the street or something like that. I always found it useful, I knew they’d find it useful, but they took to it like fish to water. They loved it."

Within two years of training under Taylor, Dylan Logan would win a world title. These early, positive steps brought great pride to the Logans – Dylan added that he 'just wanted to emulate what my father had done'.

"When I lived in Clondalkin, I went down there and trained twice a week. Every other day my da would have me and my brothers sparring each other in the kitchen," remembered Dylan.

Michael added: "I used to have them out the back garden with headgear on. My wife would say, ‘you’re going too hard on them’ and I said ‘look, if they’re able for me, they’ll be able for anything that comes up in front of them’ – and it was true. Dylan lives for this stuff, you know. That's all he ever wanted to do." 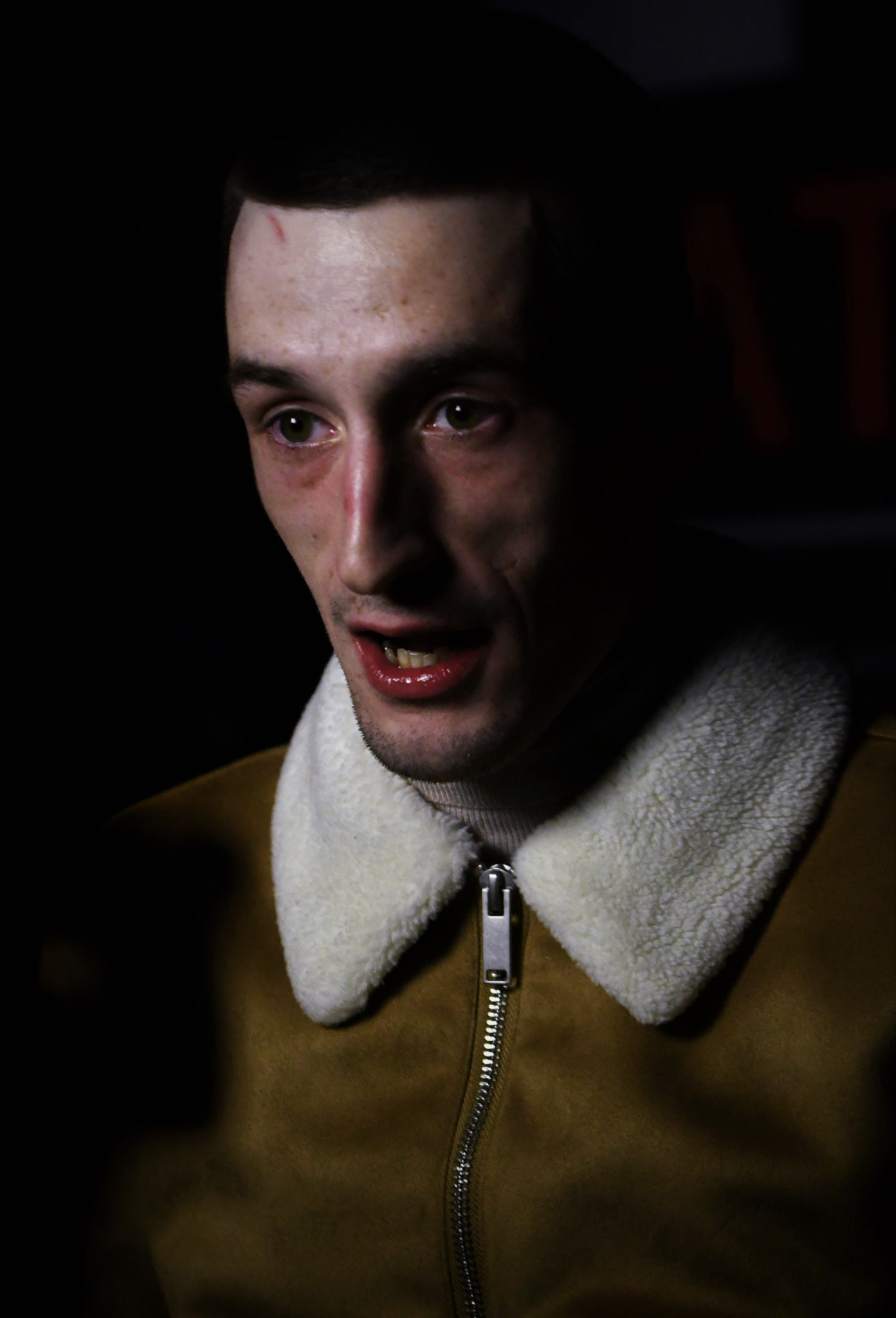 The portrait of Dylan Logan, captured by Sathishaa Mohan, will be exhibited in the National Gallery of Ireland until 21 March 2020 and then moved to the Crawford Art Gallery in Cork from 17th April to 11 July 2020.

Karate, and those first steps towards mixed martial arts, soon became a daily part of Dylan’s life throughout his teenage years.

"There were gymnastic mats down the back of the school gym. I put them out one day and one of the guys used to do a bit of kickboxing. I was only doing karate but had seen a couple of MMA movies. So, I had an idea of how to do say, an armbar - and stuff like that. But I really had no idea how to do it on somebody who knew what they were doing. We just went at it nice and controlled. Then, every week it was like Fight Club at school. I used to pull the mats down and be like, 'Who wants some?',"

Whilst completing his school years, Logan was mocked by those around him for not filling out his CAO form. The thing was, he only had one career aspiration – to be a prize fighter.

"I was laughed at. I was absolutely laughed at! I swear to god, they were like, ‘Oh, you have to put something down. You have to put a course down.’ I’m like, ‘I don’t have to do anything. I have to get my Leaving Cert out of the way and that’s it, after that, my ma and da said I could do whatever I want.

"It would take me four years to go to college and secure a job afterwards, so I asked them to give me four years of MMA, and let me show them what I can do."

Dylan’s commitment and dedication to learning martial arts led him from karate to kickboxing to MMA. He was determined to learn as much as could in his craft.

He jumped straight into it and amassed four wins and a loss as an amateur MMA fighter. A rough start ensued with his professional career – beginning with two losses, but he’s bounced back.

The portrait of Dylan Logan was taken at Bellator 240, in Dublin, in February of this year. He had just lost to a submission by rear-naked choke by Calum Murrie, his fourth defeat so far.

"Dylan is one of these guys that are very positive,” said coach Dave Roche of Straight Blast Gym (SBG). “When he lost early on, he showed great maturity as a fighter to come back, start improving and then go and start winning fights. He’s an incredibly special athlete. Fighters react in different ways. Some get very anxious and nervous during fight week. Dylan is the opposite. He is a fun guy; he’s always joking and he’s always good-humored. Some fighters get quite anxious on fight week. Dylan just seems to be the opposite. He’s very relaxed. I don’t know if it’s an advantage or a disadvantage. Sometimes I get nervous looking at how relaxed he is!"

Roche noted that John Kavanagh holds Logan in high regard: "When I joined the team in SBG, Dylan was one of the stand-out guys. John and I would regularly talk about each individual fighter and Dylan was certainly one that we think will go on to do big things in the sport. I know John has a lot of faith in him and he highly rates him as a rising star within MMA."

During training, Dylan constantly strives to learn new techniques and to apply them using his own style; this makes him a great student and sparring partner according to other fighters.

Ciaran Clarke is a featherweight fighter with Bellator, an American based MMA agency which is one of the biggest promoters for the sport. He remarked that Logan makes a great sparring partner: "Dylan and I would fight at a similar weight and we’d have the same experience. We’re very good at training together. We bounce off each other and he’s very tricky. You have to really concentrate with Dylan because he can catch you off guard anytime."

Clarke says that Logan’s positive mindset means he is good to have around the gym; “In terms of attitude - you could come in some days and you may not be feeling it. Not Dylan, he’s always in high spirits and always up for a laugh in the gym, he’d always bring you up. So, it’s great to have him around the gym. You love training with him.”

Logan’s photograph is the first-ever MMA related portrait in the National Gallery of Ireland. It was selected as one of the 26 shortlisted candidates for the Zurich Portrait Prize 2020, hosted by the gallery. The prize’s judges selected the image as one of two highly commendable images.

When he came to see his portrait with his partner, Becky Lynch, it was the first time he visited the National Gallery of Ireland.

Seeing his photograph hanging on such prestigious walls has motivated him.

"I want to come back with a vengeance. This is after re-igniting the fire in my belly. The last fight was a kick in the teeth, but to see what has come out of this loss is inspirational."

This portrait captured one moment; a snapshot from a single frame of a fighter’s life. The canvas is now blank – and it’s up to Dylan Logan to show us what’s next.

* The portrait of Dylan Logan, captured by Sathishaa Mohan, will be exhibited in the National Gallery of Ireland until 21 March 2020 and then moved to the Crawford Art Gallery in Cork from 17th April to 11 July 2020.