Vinny Perth says difference of opinion with the Board is the reason for him no longer being head coa...

Vinny Perth says difference of opinion with the Board is the reason for him no longer being head coach at Dundalk.

The 44-year old was relieved of his duties on Thursday night, 24-hours after Dundalk's Champions League exit to Slovenian champions Celje.

Perth was spending his first night out of work in eight years as a pundit for RTE's coverage of Shamrock Rovers' scoreless draw with Shelbourne at Tallaght Stadium.

The Irish Daily Mirror reported on Thursday night that Perth was aware he would be replaced before Wednesday night's game in Budapest.

The now former Dundalk boss was asked by Peter Collins when he was made aware of his change in job status, "I suppose officially was last night, maybe 7 - 7.30 in the evening," Perth replied.

"But it was inevitable that it was going to happen, so it wasn't a real shock.

Wednesday night's defeat means Dundalk have won just once since football's restart. That lone victory was a 1-0 defeat of John Sheridan's Waterford in the FAI Cup first round.

In the SSE Airtricity Premier Division, they're 9-points off leaders Shamrock Rovers.

"I suppose it's been a difficult time for the club, on and off the pitch, for a number of months," Perth replied, when asked if he could pin-point a reason for his leaving the club.

"There's been things in the background that just haven't been good enough, and ultimately they've come onto the pitch.

"We haven't been good enough on the pitch. But listen, it's been eight wonderful years at Dundalk - an amazing journey.

"We've left real legacy there, everybody, the players [that are] still there. They've still got stuff to fight for, they're still in Europe.

"What we've achieved has been immense.

"Hopefully the future of Irish football is in a really strong position with the international manager. He's come out of that set-up as well, and a lot of players.

"And ultimately I think think the League of Ireland is better because of what's happened at Dundalk for the last eight years." 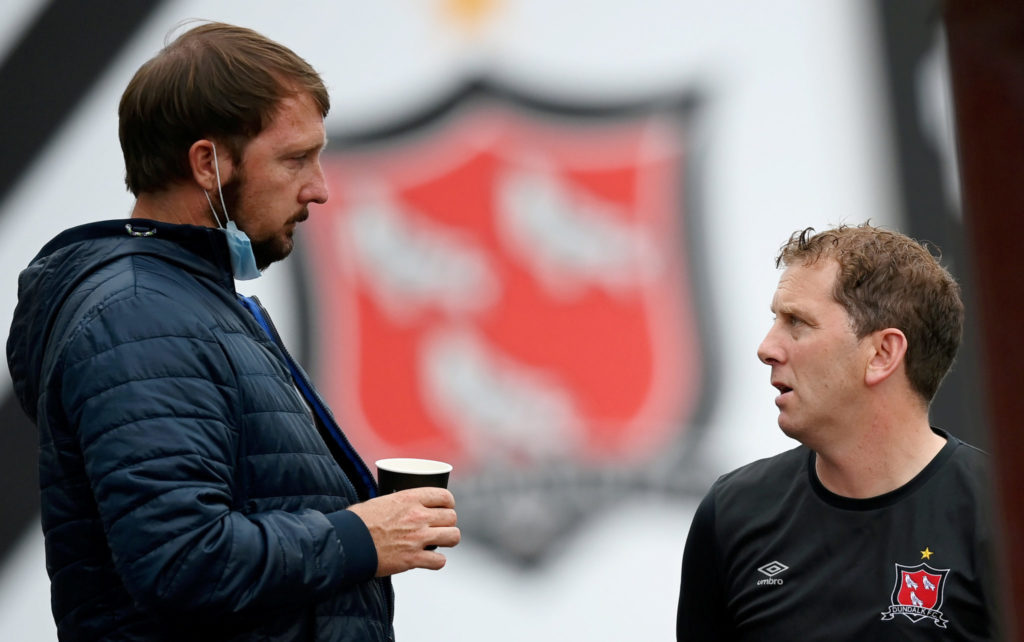 11 August 2020; Dundalk manager Vinny Perth and Mark Burton, left, prior to the Extra.ie FAI Cup First Round match between Dundalk and Waterford FC at Oriel Park in Dundalk, Louth. Photo by Stephen McCarthy/Sportsfile

Gill is a long-time lieutenant of Perth's, while former Waterford boss Reynolds was brought on board after Ruaidhri Higgins left to take up a role with Kenny's Republic of Ireland coaching ticket.

Former Manchester City youth coach Mark Burton had also been brought on-board in recent weeks. It's been speculated that his appointment was made by owners Peak6, and not Perth.

Burton's also been spoken about as a potential replacement for Perth.

The former head coach was remaining cagey when asked if any of those changes had played a role in his departure, "Ultimately I'm still technically employed by the club until everything is sorted out. So I have to be wary of where I stand in terms of what I can say, or can't say.

"But there's no doubt there was a difference of opinion on where we are, and where we need to go to move forward.

"And that's ultimately what happens in football clubs, whether it's Dundalk or Premiership clubs or whatever the case may be.

"We've a difference of opinion, they've decided the best way to move the club forward is going that... their way and I have to respect that."

Perth was also asked if there was meddling in his team selections.

"Meself and John were very strong. The players - as I've said - have been wonderful for this club.

"And ultimately the international manager comes out of what's happened as an overall group. And the players deserve huge credit for that.

"Stephen was immense for the group.

"People will throw mud, and if they throw enough of it eventually it sticks.

"On Wednesday night I went out with a very clear mind what the right team was in the Champions League game.

"And people will say 'ultimately, that's why you lost your job', I don't think it is. I think it was more than that.

"The fitness levels in our league at the moment are through the roof - they're the highest they've ever been - and I think that's because of that legacy that's been left at Dundalk."