Open champion Shane Lowry says he was always determined to tee it up at this week's re-fixed Dubai D...

Open champion Shane Lowry says he was always determined to tee it up at this week's re-fixed Dubai Duty Free Irish Open at Galgorm Castle.

The 33-year-old made history by winning the tournament at the Baltray as an amateur in 2009 and returns to Antrim, where he landed his maiden major title in the summer of 2019.

Now feeling comfortable with a new set of irons and with his old driver back in the bag, he's determined to put in a strong showing at his home open this week.

While Rory McIlroy was among the players who opted not to travel to the tournament but Lowry says he was always going to support it.

"I wanted to come play," the Offaly man said at virtual press conference this afternoon. "I feel I owe it to The Irish Open...I owe to them and the Tour and support the event and to come here and give it my best shot to try and win it again.

"That's the reason I'm here this week and I don't think there will ever be a time when I won't play in The Irish Open and that's what I've shown this week and that's how I feel about the event.

The world number 29 is the highest ranked player in the field at Galgorm Castle this week but he says being the headline act hasn't changed his approach.

"I don't think it's possible for me to have any more expectation that I do every year going into The Irish Open! If anything having no crowds here, I'll miss them, but it might help me a little bit because I probably try a little bit too hard sometimes in front of home crowds and it does me in sometimes.

"The last couple of years at The Irish Open I've been a bit better than I had been in previous years but no matter what week it is I put a bit of pressure on myself to play well, that's just the way I am." 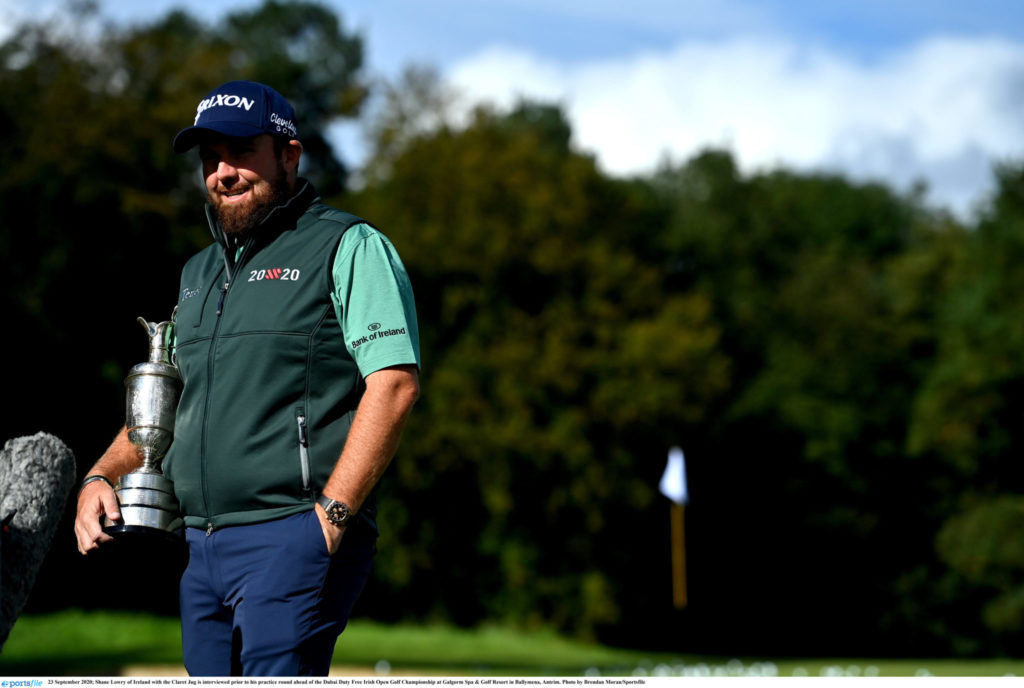 23 September 2020; Shane Lowry of Ireland with the Claret Jug is interviewed prior to his practice round ahead of the Dubai Duty Free Irish Open Golf Championship at Galgorm Spa & Golf Resort in Ballymena, Antrim. Photo by Brendan Moran/Sportsfile

Lowry saw his wife and daughter for the first time in almost three-months on Monday, he isolated at home before making the trip to Ballymena today and he's looking forward to a spell at home with his family after this Sunday.

"I'm just here to do the best I can and hopefully that's up near the top of the leaderboard at the end of the week."