Real Madrid manager Zinedine Zidane says he won't tell Gareth Bale what to do following reports that he missed training due to being ill, but was seen playing golf.

The Welsh winger is reportedly on his way out of the Bernabeu this summer. He had been close to signing a deal with Chinese side Jiangsu Suning FC, but it broke down when Real Madrid blocked the deal.

Speaking in a press conference, Zidane was responding to reports that Bale had been photographed on the golf course when absent from training. "I don't know anything about that. I've not seen the picture. I'm here. I'm here with my players, so I can't really say much about that," the Real Madrid manager said.

"I hope that he's working out well. We're here and we're thinking about the team that's here and all the players that are here.

"We'll see when we get back to Madrid. I won't tell him off or tell him he's not allowed to do it - he's old enough to do what he wants and he probably had his reasons. 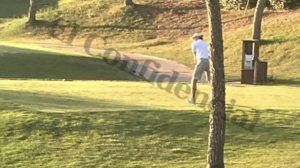 Gareth Bale's agent labeled Zidane a "disgrace" earlier this summer when the Frenchman said that him leaving the club would be "best for everyone". The 47-year-old, three-time Champions League-winning coach then said to the media that he "never disrespected anyone".

The 30-year-old Welshman signed for the Spanish giants in 2013 for a world record fee of over €90 million (£77 million) and in that time has helped the team win four Champions League titles and a La Liga. He has made 155 league appearances for the club in that time, scoring 78 goals.