Markus Feehily Has A Daughter

Markus Feehily and his fiancé have welcomed their first baby, a girl called Layla who was born on Tu...

Markus Feehily Has A Daughter

And other showbiz news

Markus Feehily and his fiancé have welcomed their first baby, a girl called Layla who was born on Tuesday. He tweeted in the last hour that they are the happiest dads in the world.

There’s an Irish guy heading to Love Island Australia! His name is Eoghan Murphy, he’s from Portlaoise but moved to the Gold Coast 10 years ago. He is, as every cast member of Love Island, physically beautiful.

Virgin Media 2 aired Love Island Australia in spring of this year, months after it ended in Australia and as far as I can see, it’s not scheduled to appear on their lineup next week so it could be spring before we get to see it.

Jason Donovan helped his neighbours put out a fire at their home, dressed only in his underwear. Armed with 2 fire extinguishers, and a pair of cax, he ran to help - and photos have now been unearthed of the night a couple of weeks. ago. Everybody needs good neighbours! 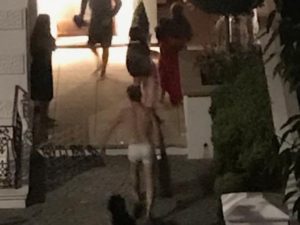