If you ever wondered why Lewis Capaldi is one of the funniest people on earth right now then look no...

There he is with his biggest influence, his older brother Warren.

If you ever wondered why Lewis Capaldi is one of the funniest people on earth right now then look no further than his Dad, brothers, closest friends and school mates. They all feature in this fascinating, entertaining and quite simply hilarious little doc about his life.

Lewis Capaldi has released a mini-documentary featuring loads of never before seen behind the scenes footage of his world tour and his feud with Noel Gallagher. (which is so ironic considering how important Oasis has been to Lewis' career... the first song he ever played to an audience was Live Forever!) 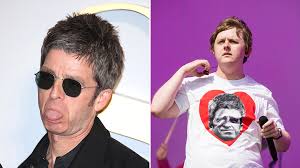 Noel and Lewis have had a well documented yet entertaining fued.

As part of a new series of YouTube Originals the documentary is called the Birthday Song and centres around Lewis doing a cover of the song that was number one in the charts the day he was born which ironically is Setting Sun by The Chemical Brothers and featuring none other than Noel Gallagher!!!

"When I hear how much I've influenced him I should be getting a cut a the royalties should'n ah eh?!! Nah, I just see him now and think that it's so cool". - Older brother Warren Capaldi

Lewis’ family, closest friends, and loved ones feature throughout and detail his life from his first birthday to his most recent successes.