Ireland could be in line for its coldest December in 12 years when a cold spell lasted over a month....

Ireland could be in line for its coldest December in 12 years when a cold spell lasted over a month.

Easterly winds are dominant over the country for the next while.

In 2010, Ireland experienced a severe cold snap with significant snowfalls across much of the country and temperatures hitting near -20 degrees Celsius in parts.

That winter also gave us one of the most viral moments in Irish television history.

The weather models for the next week suggest temperatures will barely get over freezing.

Cathal Nolan from Ireland's Weather Channel says there's a chance of snow, but there is a question over how much and where:

"Initially I don't think we will experience temperatures quite as low as we experienced at that particular time, but that depends on the longevity of the cold spell.

"The longer the cold spell lasts certainly the increased chances we will see of the temperatures getting towards what we would have experienced in 2010.

"At present towards the middle and end of next week temperatures will struggle at times to get above freezing at times - certainly in inland and sheltered areas." 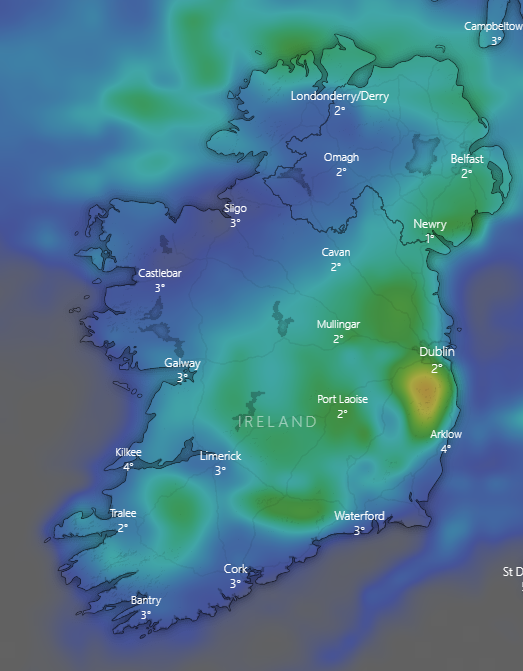 Possible snowfall in Ireland over the next 10 days. Credit: Windy.com

But what about snow? Well, Cathal Nolan says "I think even at this particular point in time, it's a case of some areas certainly will see wintry precipitation.

"It's just where exactly that will be. It depends upon, I suppose, the direction and flow of the winds that were seen at any given moment in time.

"Mostly when it's coming in the form of showers, it'll be dictated as to whether it's an easterly or an orderly wind as to what parts of the country see the snowfall.

"If it's a more widespread event, well then in that eventuality, all areas can expect to see some heavy snow at times and for."

We're 'On Track' To Come Out Of Lockdown In December