Large Vigil For Thiago Cortes After Fatal Hit And Run

Hundreds of people marched through Dublin city centre yesterday evening, after the death of cyclist...

Large Vigil For Thiago Cortes After Fatal Hit And Run

They were protesting against dangerous cycling conditions in the city and calling for justice for the 28-year-old.

The Deliveroo rider who was originally from Brazil was taken to hospital after a hit and run while he was cycling on the quays on Monday, but died yesterday.

The driver involved fled the scene and Gardai found the car in question nearby.

Gardai are investigating the hit and run and are appealing for witnesses. 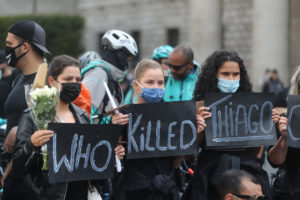 Deforestation In The Amazon Increases by 20% In A Year