A winning EuroMillions ticket worth €500,000 has been sold in Tullamore, Co. Offaly.

They won the half a million euro prize in last night’s EuroMillions Plus draw.

The winning ticket was sold at the Newsround shop in the Dunnes Shopping Centre in Tullamore. 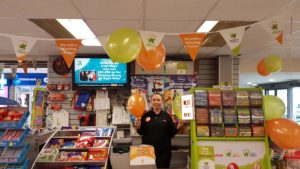 Pictured is Lena Gavin, manager of the Newsround store in the Dunnes Shopping centre, Tullamore, Co. Offaly where the winning €500,000 EuroMillion Plus ticket was sold from the draw on Tuesday 12th Feb 19

It's the fourth EuroMillions Plus to be won in Ireland so far in 2019.

I’m delighted that we sold this winning EuroMillions prize to one of our customers and hope it brings a lot of happiness to them. Best of luck to whoever it is!

The good news doesn't stop there!

Two other Irish EuroMillions players, from Dublin and Cork, won a cool €293,221 each.

It's after they matched five numbers and a lucky star – both falling one number short of hitting the mega €151,629,098 jackpot!