The Foreign Affairs Minister offered Katherine Zappone a UN role four months before the appointment was agreed by Cabinet.

Text messages between the pair have been released by the Department of Foreign Affairs this afternoon.

On Thursday March 4th, Katherine Zappone texted Minister Simon Coveney thanking him for the "incredible opportunity" and said she will be so proud to serve Ireland again. 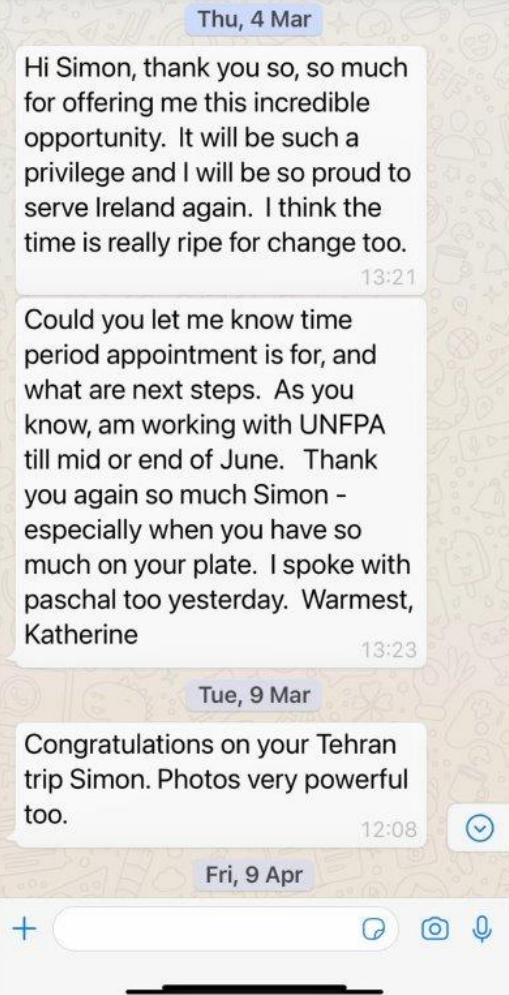 She added: "Thank you again so much Simon - especially when you have so much on your plate.

"I spoke with Paschal too yesterday."

Ms Zappone sent an earlier message on February 22nd, expressing her interest in getting an "intro to Sam Power" - the former US ambassador to the UN.

She said the then newly appointed US President Joe Biden's interest in women's and LGBTQ issues was "very much in sync with our/Irish foreign policy".

Ms Zappone also told the Department of Foreign Affairs Tánaiste Leo Vardakar was really excited about her appointment, five days before the Taoiseach was informed about the role.

It comes after texts released last week showed she had asked the Tánaiste about taking up a UN special envoy role 11 days before Cabinet approved her nomination.

In an email sent on June 6th from Ireland's UN ambassador Geraldine Byrne Nason to a department official, Ms Byrne Nason said Katherine Zappone had been in touch asking about her nomination as LGTBQ envoy.

She said Ms Zappone said there had been "radio silence" from the minister about the position.

The documents have been released in an attempt to bring clarity to the process behind the appointment, ahead of Minister Coveney's appearance before an Oireachtas committee tomorrow.

Ahead of the release of the documents, Taoiseach Micheál Martin today said there needs to be a full review of the role of special envoys.

He said any future appointments will be made by “open public competition.”

Zappone Knew Of Hyde And Seek Creche Concerns A Year Ago