Ulster's Darren Cave believes that Will Addison's stifled career in England is more of a reflection...

Ulster's Darren Cave believes that Will Addison's stifled career in England is more of a reflection on rugby culture across the water and reckons his ability to adapt will see him strive in an Irish jersey.

Addison joined Ulster in the summer of 2018 from Sale and has since picked up international caps for Ireland in last year's November Test Series.

Speaking on OTB AM, team-mate Cave reckons clubs and coaches in England overlooked his true potential.

"I do find it very strange that Will Addison has come to Irish rugby," he said. "I'm not sure what that says about English rugby culture or what the English rugby team look for in a player.

"If you look at the guys who have played in the centre for England, say since the 2015 World Cup, the likes of Luther Burrell, Sam Burgess and Billy Twelvetrees.

"If you went through the clubs you could name probably 10 or 12."

He continued: "Will's not the biggest guy, but he's perfect for playing centre - so is Garry [Ringrose].

"You look at some of the guys, even Twelvetrees who has the skills, he's a big lad. So is Burrell and Burgess.

"Maybe it is size. The amount of players in the Premiership who just wrote Will off.

"I just think it says a lot about English rugby that a player of Will's talent - be it at centre or fullback - felt that he had to pursue rugby in another country."

Will's not the biggest guy, but he's perfect for playing centre... 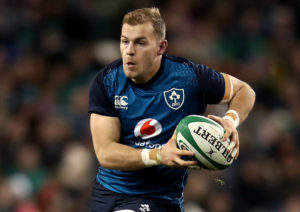 Ireland's Will Addison during the November Series clash against the USA.

Cave explained that Addison's versatile reputation means he has continued to pick up new skills and improve every year. Those skills had attracted the attention of the Irish coaching staff.

"He's a very good learner. I'm sure I saw an improvement in him when he came back from November [Test Series] having worked with Andy Farrell and Joe Schmidt.

"I do think a couple of years before Addison arrived in Ireland, I think he had looked at coming to Ulster or going to another province.

"This wasn't the first time that Joe had been after him."

"I'm not sure what it does say about the culture of English rugby..." #OTBAM pic.twitter.com/J63qN4tMAf

For more on Ireland's upcoming Six Nations opener, you can watch our preview with Alan Quinlan right here.