Hosts Brazil beat Peru 3-1 at the Maracana Stadium in Rio de Janeiro to win the Copa America for the...

Hosts Brazil beat Peru 3-1 at the Maracana Stadium in Rio de Janeiro to win the Copa America for the first time since 2007.

It was an eventful game for Manchester City striker Gabriel Jesus who was on target in the final in Rio.

Jesus was sent off for two bookable offences either side of half-time after setting up Brazil's opener. He showed quick feet to cross for Everton in the 15th minute.

Peru equalised just before the break when the hosts conceded a penalty. Thiago Silva was adjudged to have handled the ball inside the box and Paolo Guerrero sent Alisson the wrong way from the spot. It was the only goal the Liverpool goalkeeper conceded in the tournament.

Brazil restored their lead in injury time when Jesus turned in a Roberto Firmino cross. The Manchester City striker saw red in the 70th minute for a second bookable offence. 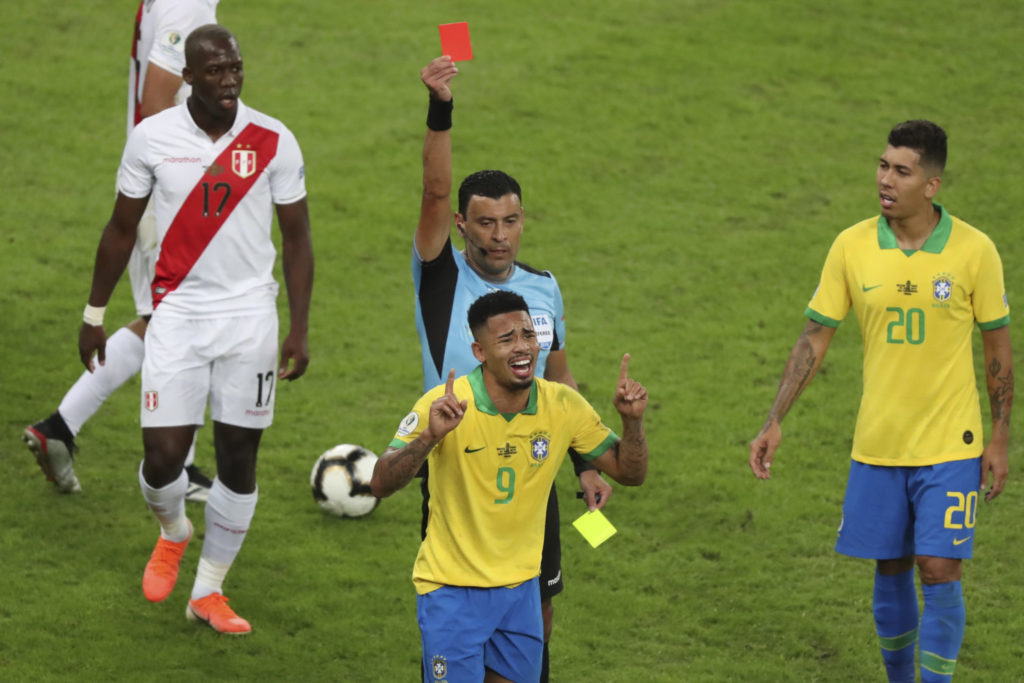 Referee Roberto Tobar shows the red card to Brazil's Gabriel Jesus during the final at the Maracana stadium in Rio de Janeiro.

Jesus was furious after being sent off and pushed the VAR monitor as he left the pitch. He then sat on steps in the tunnel in tears.

Peru pressed for an equaliser but Richarlison converted from 12 yards with two minutes remaining after Everton had been taken down.

It is the ninth time Brazil have won the Copa America and is their first tournament success since winning a gold medal at the 2016 Olympics.