Dundalk boss Giovagnoli: "Perform, do well and the history will come"

Dundalk interim head coach Filippo Giovagnoli has warned his team against getting bogged down in the...

Dundalk boss Giovagnoli: "Perform, do well and the history will come"

Dundalk interim head coach Filippo Giovagnoli has warned his team against getting bogged down in the potential historical side of their Europa League playoff round tie.

The Lilywhites play KÍ at the Aviva Stadium on Thursday night, with a place in the Europa League group phase at stake.

Giovagnoli could follow former Dundalk boss Stephen Kenny, and ex-Shamrock Rovers manager Michael O'Neill as the only managers to guide teams into the group stage.

The €2.92million on offer could also alter the landscape at Oriel Park for years to come.

But the Italian is only thinking about the 90 minutes ahead of his side on the pitch.

"I'm trying to be focused on the task," Giovagnoli told OTB Sports, "And don't make this big opportunity become something that can disturb us.

"Just be focused on the task. Just study the opponent, perform, do well and then the history will come."

The Faroes of KÍ have had an unusual route to Lansdowne Road.

Their first qualifying round tie with Slovan Bratislava was awarded in their favour after the Slovak champions were not cleared to play.

While last week, they put 6 goals past Dinamo Tbilisi to set up the meeting with Dundalk.

But Giovagnoli says there is a belief instilled in his side; a belief that was evident during their penalty shootout win away to the Moldovan champions, Sheriff. 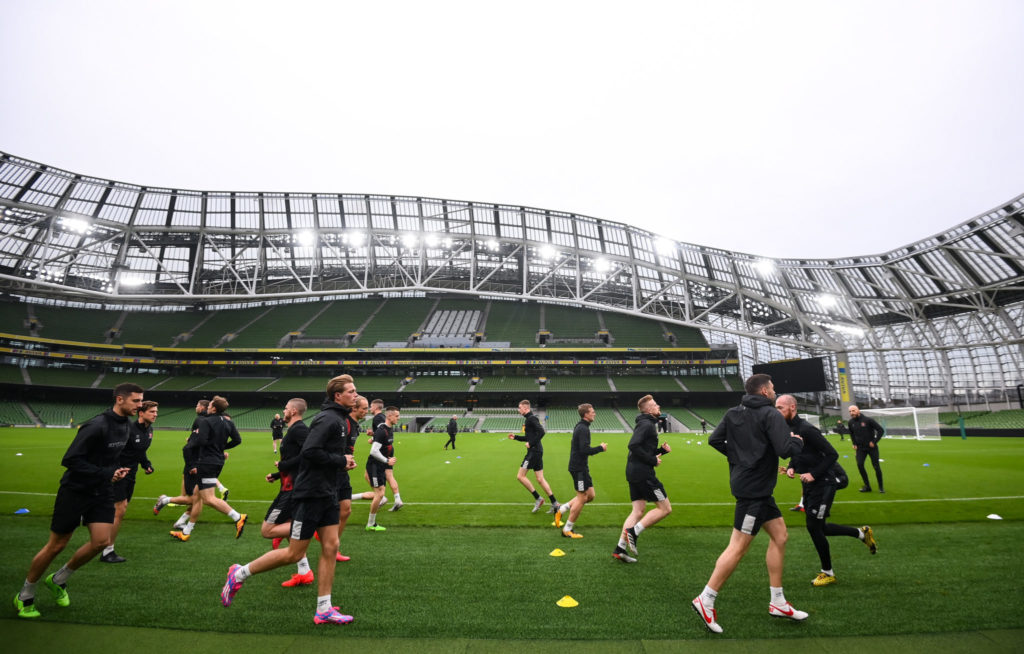 30 September 2020; Dundalk players during a training session at the Aviva Stadium in Dublin. Photo by Stephen McCarthy/Sportsfile

"Trust me, if you were there you can understand how much we were believing on the win", the 49-year old told Will O'Callaghan.

"Because when we started the penalty kicks, we were so sure that we were going through that every single player was asking me to kick the penalty.

"In this occasion, players they try to hide and all of them were giving me eye contact like 'I want to kick, I want to kick'.

"This was amazing, and this made me so sure that our destiny was there. And I think the players deserve the success, and I was really proud of them."

However, Giovagnoli hopes it won't come to penalties tomorrow. They'll approach the game "like a final" and try to win inside 90-minutes.

The interim head coach hasn't bought in to the notion that KÍ will be underdogs at the Aviva, especially given their haul against Dinamo Tbilisi.

He said they began analysing Thursday's opponents as soon as Chris Shields' penalty hit the net in Tiraspol.

"We were impressed, we respect them, but we are not afraid of nothing.