An historic century from Simi Singh couldn't prevent Ireland from suffering a series-levelling defeat to South Africa in Malahide.

Singh's 100 was a record in a one-day international for an Irish batsman at no.8.

Despite that, Ireland fell to a 70-run defeat.

South Africa won the toss and elected to bat first, aiming to take advantage of a dry track on a scorching hot day by the Dublin coast.

Their intuition was proved correct with Janneman Malan and Quinton de Kock putting on a first-wicket partnership of 225.

De Kock was first to go on 120, with Malan eventually lasting the duration with 177.

Ireland would find little joy with the ball, with South Africa ending their innings on 346/4, leaving Andy Balbirnie's side with a mountain to climb.

"I thought we bowled OK," the captain said afterwards, "We didn't bowl too many bad balls. 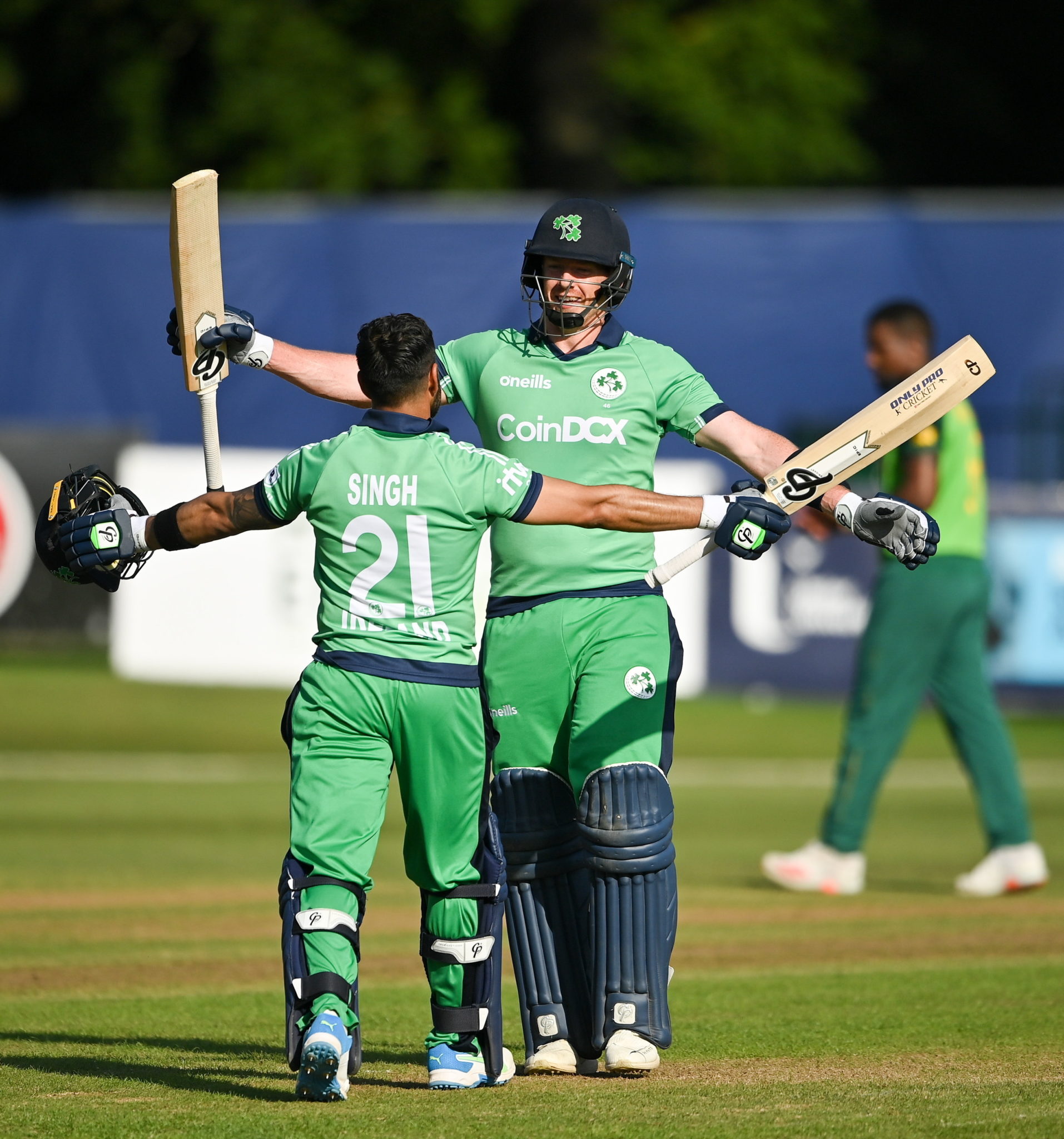 16 July 2021; Simi Singh of Ireland, left, is congratulated by team-mate Craig Young after bringing up his century during the 3rd Dafanews Cup Series One Day International match between Ireland and South Africa at The Village in Malahide, Dublin. Photo by Seb Daly/Sportsfile

"They're obviously world class players and if you bowl a bad ball you'll be hit. But we managed to drag it back and we always felt that if we could get the two lads [Malan and de Kock] set out we could pull it back.

"We were eyeing maybe 330 which potentially could have been a more chaseable score than 350, or whatever it was.

"I think the bowlers deserve a bit of credit, because it was obviously a very good wicket - the wickets have been great all week here - and it was hot.

"Like I said, for them to bring in someone of the stature of Quinton de Kock was a tough ask for our bowlers but I thought they really did their best today."

After his 79 on Tuesday, Harry Tector followed that with a ship-steadying 29. Curtis Campher also added an air of respectability with a 54.

But it was Singh's century that stole the show, with the hosts bowled out for 276.

"He spends probably the most time in the nets out of all of us," Balbirnie said, "He works really hard on his game.

"He's really grown into a top all-rounder for us.

"I thought he bowled pretty well today under [the] circumstances. For him to get his maiden 100 batting at 8 is exceptional.

"And also credit to the guys that hung around with him and gave him that opportunity to do it.

"He's had a few scores in the last six months that have kind of propelled him a bit more into that role as that genuine all-rounder.

After Tuesday's win and Sunday's washout, the series ends level.

Balbirnie feels Ireland showed their worth in the 50-over game this week.

"The players certainly believe that we belong at this level," he said, "and we can beat these teams more regularly.

"Today didn't go our way, but we're going to get more opportunities to play this teams throughout the World Super League.

"And if we can pick up points here and there, and have a good home series against Zimbabwe we'll be right amongst it."

Graham Ford to step down as Ireland Men’s head coach

Stirling racks up another ton but Ireland whitewashed by Afghanistan