Moran made his senior league debut in the green and red against Down in 2003, before his championship bow the following year against New York.

Speaking today on the news, Horan says Moran can be proud of all that he has achieved with his county.

"Andy’s retirement today brings an end to an amazing inter-county playing career. Andy was a brilliant player and fantastic person that did everything humanly possible to be the best he could be.

"Andy’s versatility on the field was special and he adapted his game as his career progressed, getting better and better, a testament to his continuous improvement mindset. A real role model for people on & off the pitch I want to thank him for his service & wish him all the best for the future."

It's the end of an era for @MayoGAA!

2017 Footballer of the Year Andy Moran has called time on his inter-county career #GAA #OTB pic.twitter.com/TIGZoHi5um

Moran won eight Connacht titles with Mayo over the course of his career, and ultimately lost six All-Ireland senior finals. He picked up his first Allianz National League winners' medal this year as Mayo saw Kerry in Croke Park.

Moran has also retired as the highest appearance holder for Mayo - having surpassed James Nallen's record in 2016. 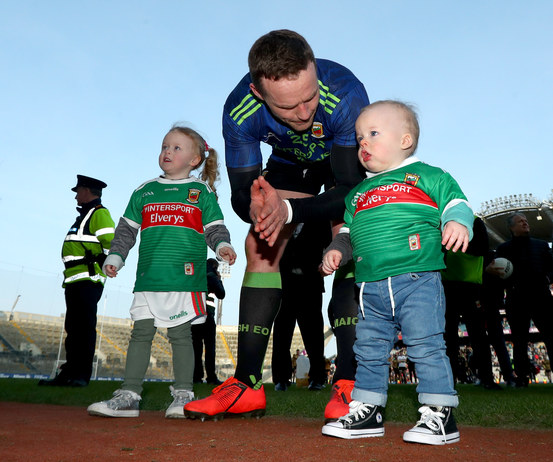 The Chairman of the Mayo County Board, Mike Connolly, has also paid tribute to Moran's commitment to and achievements with the team over the years.

"Andy Moran hangs up his Mayo jersey after 20 years of magnificent service to the county & the first thing we must do is thank him for his service. He was an outstanding forward as typified by his two All-Stars, 8 Connacht medals and numerous other accolades he won along the way. To play for your county 183 times is an unbelievable achievement. The commitment he has shown to the green & red can never be questioned and he is a shining example to all underage players out there of where hard work and dedication gets you.

"On behalf of everyone involved in Mayo GAA I want to thank him for the loyalty and commitment he has given to Mayo football and beyond I wish Andy & his family all the very best in the coming years."