Stephen Kenny says he won't allow himself to be sidetracked by media speculation regarding his futur...

Stephen Kenny says he won't allow himself to be sidetracked by media speculation regarding his future.

A comical Sergej Milinkovic-Savic own goal salvaged a deserved point from Tuesday night's World Cup qualifier with Serbia at the Aviva Stadium.

It finished 1-1, with the Lazio midfielder's howler cancelling out his earlier opener.

A raucous, partisan atmosphere was generated by the 25,000 inside the Lansdowne Road ground, perhaps at odds with the talk of uncertainty around Kenny's position.

And while the night ended on a high, the former Dundalk boss is still seeking a first competitive win with 16 games now under his belt.

Asked after the game if he would be seeking the public backing of his employers, Kenny responded, "I've clear communication with people within the FAI, and they've been nothing but supportive.

"It's irrelevant if someone writes something on the back of a newspaper... I can't get sidelined by that. I need to stay focused on the job in hand.

"People have seen over the last week... they've seen some really talented players coming through. The experienced players have shown a brilliant attitude.

"A 97th minute goal in Portugal - which would have been one of the great results - is our only defeat in six matches now.

"But we've been drawing too many. We need to start turning the draws into wins. 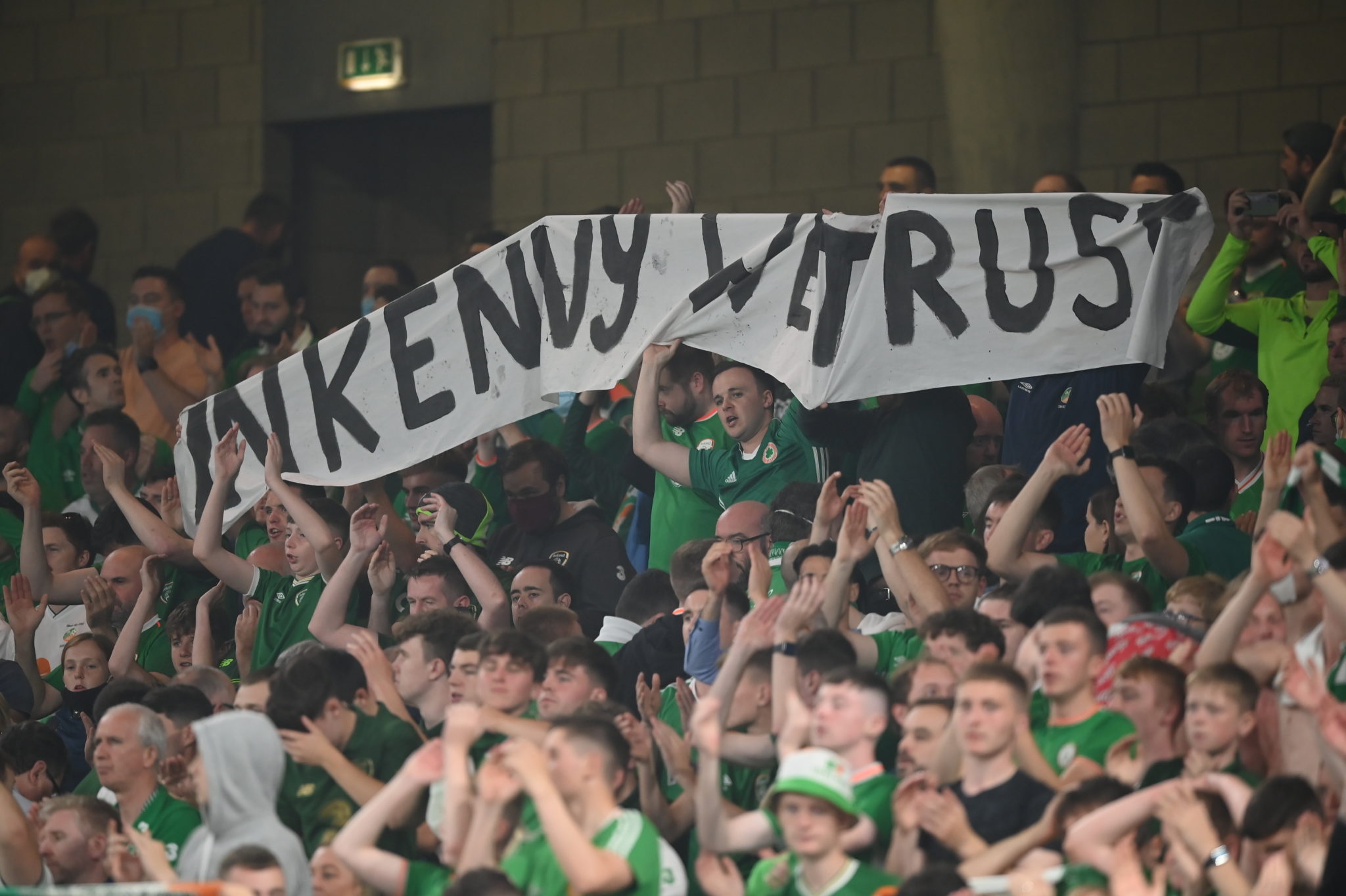 7 September 2021; Republic of Ireland supporters during the FIFA World Cup 2022 qualifying group A match against Serbia at the Aviva Stadium in Dublin. Photo by Stephen McCarthy/Sportsfile

"We've got the two games next month [Azerbaijan away and a home friendly with Qatar], and then we've got Portugal here, and Luxembourg.

"So yeah, a lot of good things from the week, but probably Serbia overall could have deserved to win tonight. They were exceptional.

"But we dug in, showed different type of qualities and played a lot of good football as well. And had obviously two chances at the death to win it with - Andrew's [Omobamidele] brilliant shot and Shane Duffy's header."

Kenny concedes that his side do lack incision, and a return of three goals in their last four games bears that out.

However, he's still convinced he's taking the team in the right direction.

"A lot of the players have shown a lot of composure," Kenny said, "And we do need to add some extra quality in the final third alright.

"We're not saying we're perfect - we're still very much a work-in-progress - but we have some good attacking wingers to come in who weren't here.

"Jason Knight has played wide in that position for us, and Callum O'Dowda obviously, and Chiedoze Ogbene who is lightning. Absolutely rapid he is, Chiedoze.

"The fact that Callum Robinson wasn't really fit enough to start, so hopefully we'll have him again because he made things happen when he came on in both games.

"It was great to have him so quickly after having COVID. So these are players that will help us improve and be better."