Up to 30,000 people attempt to climb Mount Kilimanjaro every year - including a couple thousand Iris...

Up to 30,000 people attempt to climb Mount Kilimanjaro every year - including a couple thousand Irish. Off the Ball's Shane Hannon brings you his 'Dos and Don'ts' after summiting Africa's highest peak in recent weeks.

Kilimanjaro has been on my bucket list for as long as I can remember. And yet at 5.30am on the morning of Wednesday July 31st, 2019, I was cursing ever getting on the plane to Tanzania. As far as I'm concerned you can't prepare for the mental endurance of that summit night.

Sure, you can be as physically fit as possible in the lead up to your expedition, but a combination of altitude, cold and dehydration will have you thinking negative thoughts on the final push.

The reality is - you get over it. We reached Stella Point at 5756 metres above sea level at around 6.30am and myself and my four Monaghan mates knew we were close. Having started the summit push from Barafu Hut (base camp) at midnight, we were mentally and physically exhausted.

But, by 7.10am, we were standing at Uhuru Peak - 5895 metres in altitude. The highest point in Africa, one of the 'Seven Summits', and the tallest free-standing mountain in the world.

You can get there too, and here are some of my bits of advice for those planning the trip of a lifetime.

Incredible experience climbing to the Roof of Africa for the last 8 days in Tanzania - Uhuru Peak on Mount Kilimanjaro 🇹🇿 5895m / 19341ft ⛰ Got the @monaghangaa jersey to the summit too 🔵🇮🇪 pic.twitter.com/EpIOGxD1SU

DO - Choose your climbing route wisely

There are multiple routes that will take you to the summit of Africa. The oldest, most established Marangu route is said to be the most popular (hence the 'Coca-Cola' route nickname), which means busier camps early on. The Machame route is a favourite too, with plenty of traffic.

We opted for the 8-day Lemosho route. This took us up from the western side of the mountain. We eventually joined up with the busier trails, but the sheer beauty of the hike from this side of Kilimanjaro was worth it alone.

We trekked through multiple zones of extremely varying landscapes - from the Colobus monkey-infested rain-forest to the moorland zone and alpine desert. The other big advantage of this route is acclimatization. Taking 8 days to climb the mountain may eat into your annual leave a little more, but don't take any chances with the altitude.

Our guides took us on regular acclimatization treks to help us cope with being at altitudes none of us had ever experienced - and taking that extra day or two on the mountain can really improve your chances of success (summit success rates on the Lemosho 8-day route are around 95% or higher.)

By day three I smelled like something scraped off the cobblestones in Temple Bar after a busy Saturday night. Sure, bring wipes, but shampoo and deodorant are completely unnecessary.

We were given a bowl of hot water every morning with which we could wash our vitals, but five days in I gave up. You'll get used to the smell inside your tent, and may even grow to like it (unlikely).

The toilets are the other thing - you're not staying in the Shelbourne after all. At most of the camps, a (very small) hole in the ground inside a wooden hut is all you'll have, and you'll just have to get used to it.

To the day I die I will still smell some of them - and no scarf / balaclava / snood will keep it out. Do yourself a favour and go early in the mornings before the afternoon heat kicks in.

'Pole pole' is Swahili for 'slowly, slowly' and you will hear your guides reminding you of this throughout your trek. Walking too fast (especially uphill) is only going to add to altitude issues.

Some people take Diamox to prevent and reduce symptoms of altitude sickness, and you can make up your own mind on that. I was the only one of our group of five that didn't take it at all and I'd say our reactions to the altitude were all fairly similar.

Painkillers and headache tablets are also an option for some, but be sure to communicate with your guides when taking anything other than the food they give you.

Lots and lots of water is essential for altitude too - we were getting up to six and seven litres a day into us, and having a CamelBak in your hiking day bag is very useful. It means you can be sipping away as you walk rather than stopping every few minutes to drink out of a bottle. 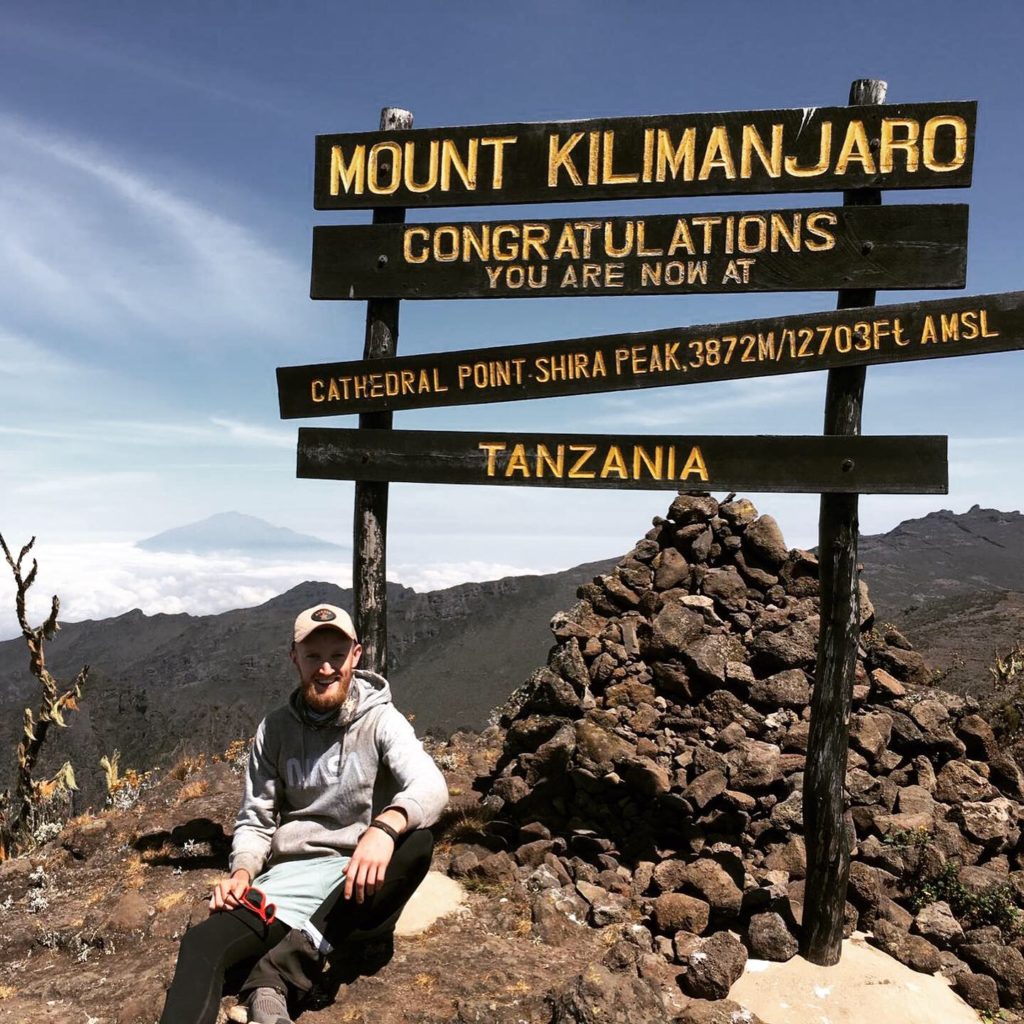 The author at Cathedral Point (Shira Peak - 3872 metres) on Day Three. Mount Meru is seen in the distant background.

DON'T - Be a picky eater

The food most companies provide on the way up is excellent - we were fed remarkably well over the course of our 8-day trek and all companies will have a cook up the mountain with them.

We often had porridge and fruit for breakfast, and the lunch and dinners ranged from cucumber soup to banana stew to fish and chips.

But whatever you are served, if you have an appetite - eat it. Altitude has a tendency to take away your appetite (it did for all five of us at various points). You will need all the energy you can get, especially for summit night.

DO - Tip your guide group well

Kilimanjaro provides a local economy for hundreds of people at a time on the mountain - our group of five were helped by a lead guide, two assistant guides, a cook and fifteen porters. You aren't allowed to climb Kilimanjaro without guides and porters.

The porters are the lowest paid and yet do the most back-breaking work. They carry the tents, large duffel bags, and cooking equipment up the mountain from camp to camp at an extraordinary pace. They always left the camp after we did in the early mornings and would ALWAYS pass us out en route carrying much heavier equipment.

They would have the tents erected and lunch almost ready on every occasion we came into a new camp.

Tipping guidelines (it is compulsory) are available online, but generally guides get up to $30 per day, assistant guides from $20 to $25 per day, a cook $15 per day and porters $8 to $10 per day. US dollars are widely accepted and encouraged everywhere you go in Tanzania - not just the Tanzanian shilling. 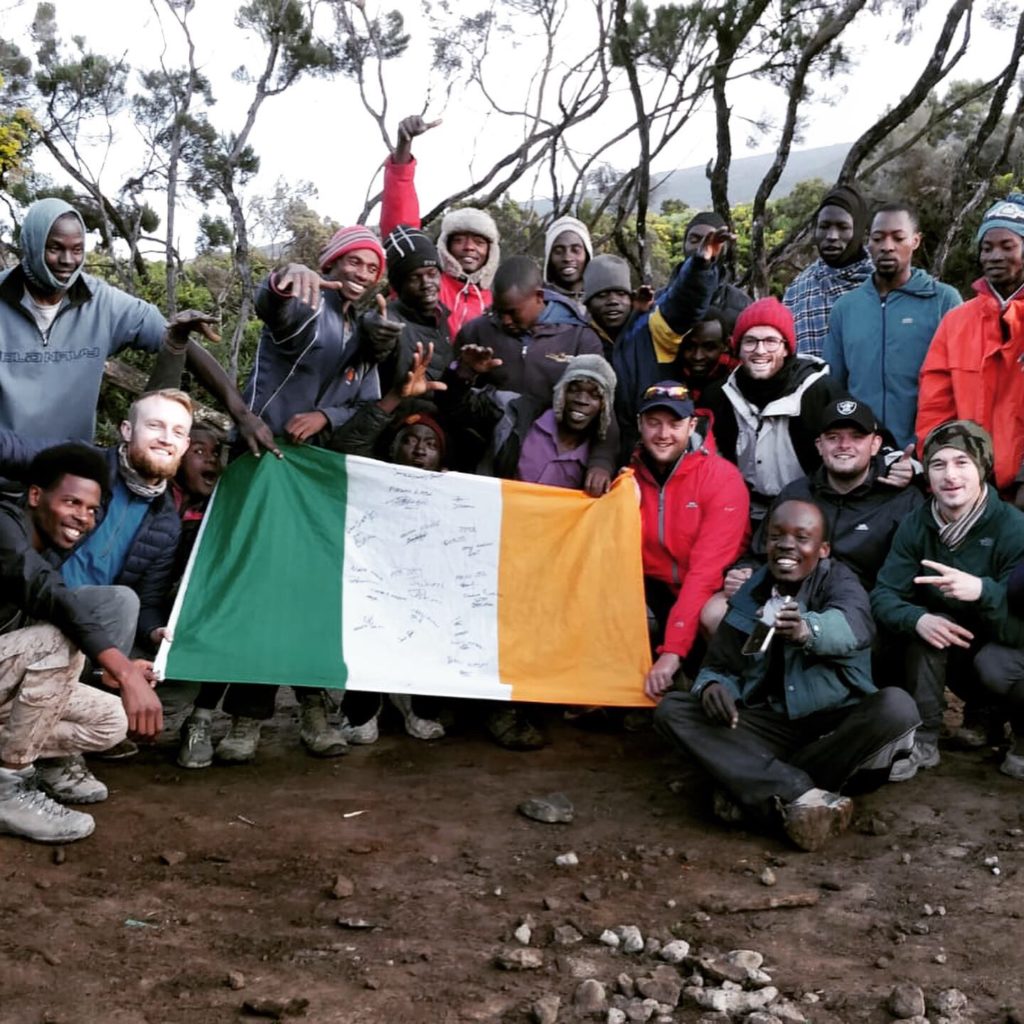 The Enosa Expeditions team plus five.

There are about 10 tourist deaths on Kilimanjaro every year. That's not a stat to scare you, but the fact is climbing at altitude is dangerous so you cannot ignore your body.

If you notice yourself or climbing partners suffering the early signs of either HAPE (High-altitude pulmonary edema) or HACE (High-altitude cerebral edema) then your guides must be informed. The former will show itself in the guise of gargled breathing as fluid fills the lungs, and the latter in the form of confusion, extreme tiredness and a general lack of awareness of what is going on.

It may be a 'once in a lifetime' trip - but that's not to say you can't come back and attempt it again if health issues arise during your climb.

The climbing seasons on Kilimanjaro generally run from January to March and again from June to October. We climbed in late July and although busy on some stretches, the weather was pretty much as expected. We experienced two extremely windy nights at both Baranco Camp and Karanga Camp (both 3900m altitude) but the conditions cannot be avoided.

Also - do your research when choosing your climbing company. There are options ranging in price, but shop around, read websites to see what is included in certain packages, and be sure to comb through TripAdvisor reviews.

We went with a local company called Enosa Expeditions, and couldn't recommend their guides Anton, Eric and Fraterino highly enough. An Irish company - Earth's Edge - do treks too so be sure to have a look around and see which sounds like a good option.

These companies will have in-depth packing lists available too, so getting all the required gear beforehand will be made easier. Don't forget to wear in your hiking boots (and cut those toenails before you go!)

DON'T - Complain about the digital detox

How often in this day and age do you get the opportunity to remove yourself from all forms of social media for eight days?

It was pure joy to get away from it all (there's absolutely no chance you'll get any form of data or WiFi on the mountain), and coverage only pops up at certain points on the climb. Guides will of course have the ability to make emergency calls if needed.

Your phone will come in handy for taking photos and videos however - do bring two or three power banks with you and make sure your phone is on airplane mode when it's on, and have it switched off for the majority of the time.

I also brought a small Bluetooth speaker which was great for playing tunes in our mess tent - turns out John Denver, Marty Robbins and Bob Marley sound great at high altitude!

DO - Bring mementos for the summit

Have you thought about what you want to bring to the Roof of Africa?

Very often you will only spend a maximum of thirty minutes at the summit, considering the dangers of the relative lack of oxygen. Turns out we only had ten minutes at the top because temperatures were around minus ten degrees Celsius. I also developed a nosebleed at the top which gave me a good excuse to get down as quickly as possible (I was fine as it turned out but better safe than sorry).

I brought a Monaghan jersey to the top, and of course we had the Irish tricolor, which our entire climbing team signed on our first night on the mountain.

It's good to be prepared so you can make that photo a memorable one, and the positive mindset of bringing items for your successful ascent can only help. 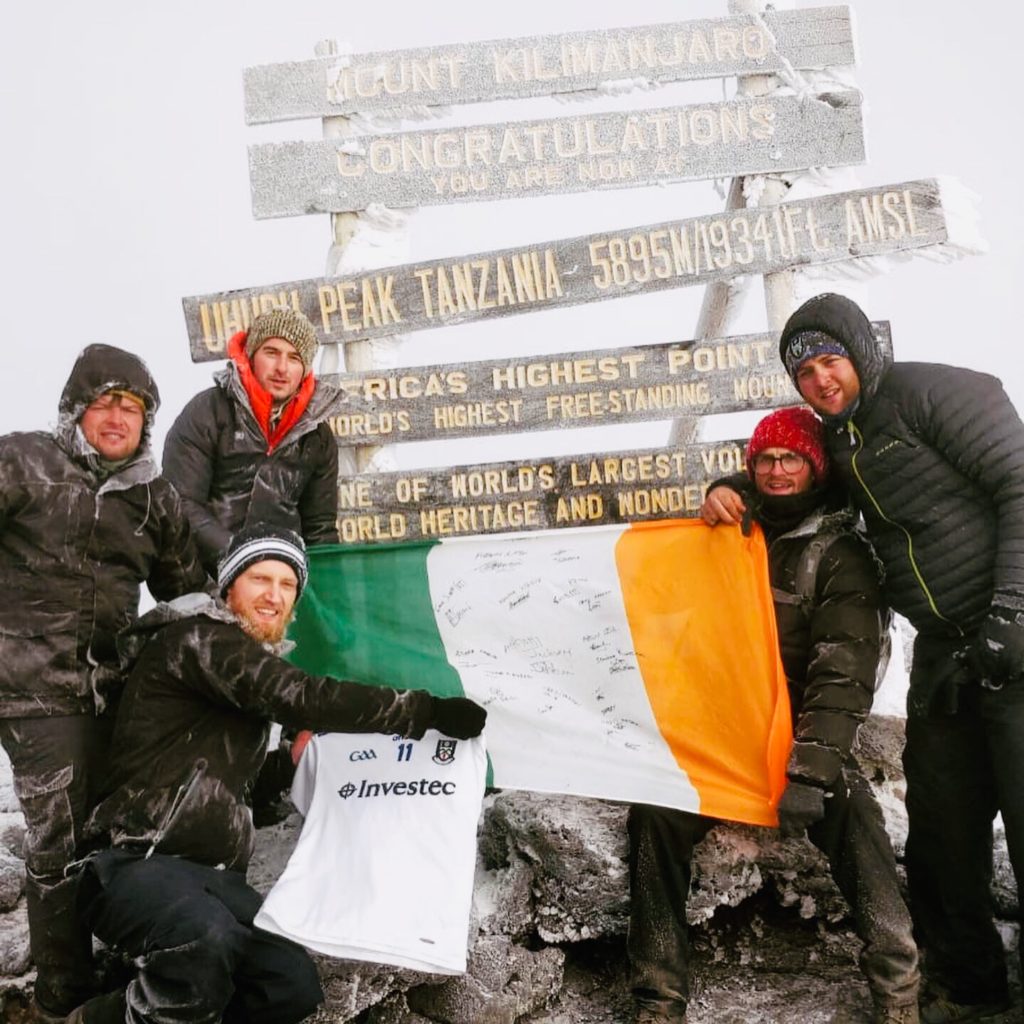 DON'T - Forget to enjoy it!

On our final morning on the mountain we made the very easy and enjoyable two-hour descent from the Mweka Camp (at a comfortable 3100 metres) to the Mweka Gate where civilisation and a cold bottle of 'Kilimanjaro' lager awaited.

That followed the traditional song and dance from our guide team after breakfast and the handing over of tips individually after we all said a few words.

We all soaked in that last ten kilometre trek through the rain-forest, knowing full well we may not be back that way.

So, if you do find yourself climbing Mount Kilimanjaro at some point in your life, enjoy it. Prepare as best you can, take in every moment, and afterwards celebrate in whatever way you know how.

Just recently an 89-year-old woman from Arizona became the oldest person to ever climb the peak at 89 years of age. EIGHTY-NINE. So, what's your excuse?

'Uhuru' is the Swahili word for 'Freedom', and that is something you will certainly feel on this adventure of a lifetime.

Myself and four friends (Colm Flynn, Evan Doherty, Anthony Croarkin and Jimmy Morris) are raising funds for The Kevin Bell Repatriation Trust in tandem with our Kilimanjaro climb.

The Kevin Bell Repatriation Trust aims to alleviate the financial hardship of bereaved families repatriating the body (bodies) of loved one(s) who have died abroad in sudden or tragic circumstances back to Ireland.