Cillian O'Connor says he's confident of being fit for Mayo's trip to Leitrim in the Connacht Senior...

Cillian O'Connor says he's confident of being fit for Mayo's trip to Leitrim in the Connacht Senior Football Championship this weekend.

The leading scoring in Championship history sat out the Westerners' loss to Tyrone in the National Football League on Sunday with a quad issue.

But the Ballintubber clubman is set to return to training tonight ahead of their game at Carrick-on-Shannon on Sunday afternoon.

"My quad was just sore after the week's training and I was hoping to make the game (against Tyrone)," the 28-year-old told OTB Sports at the launch of AIB's sponsorship of the All-Ireland Football Championship.

"It was probably touch and go all week, I was doing some modified training in the week after the Galway match and pushing hard to try and get into the manager and selectors' thoughts but just had a late fitness test and it didn't quite feel right.

"When you're not 100 percent then there's lads ready to step in ahead of you and do the job so you have to trust and go with the medical advice. Especially given it's such a short season as well, it's so condensed, you can't risk aggravating any injury or you're gone.

"The physios weren't happy to clear me, that was frustrating, but I'm back training this week and hoping to get myself back in contention for the Championship game, fingers crossed." 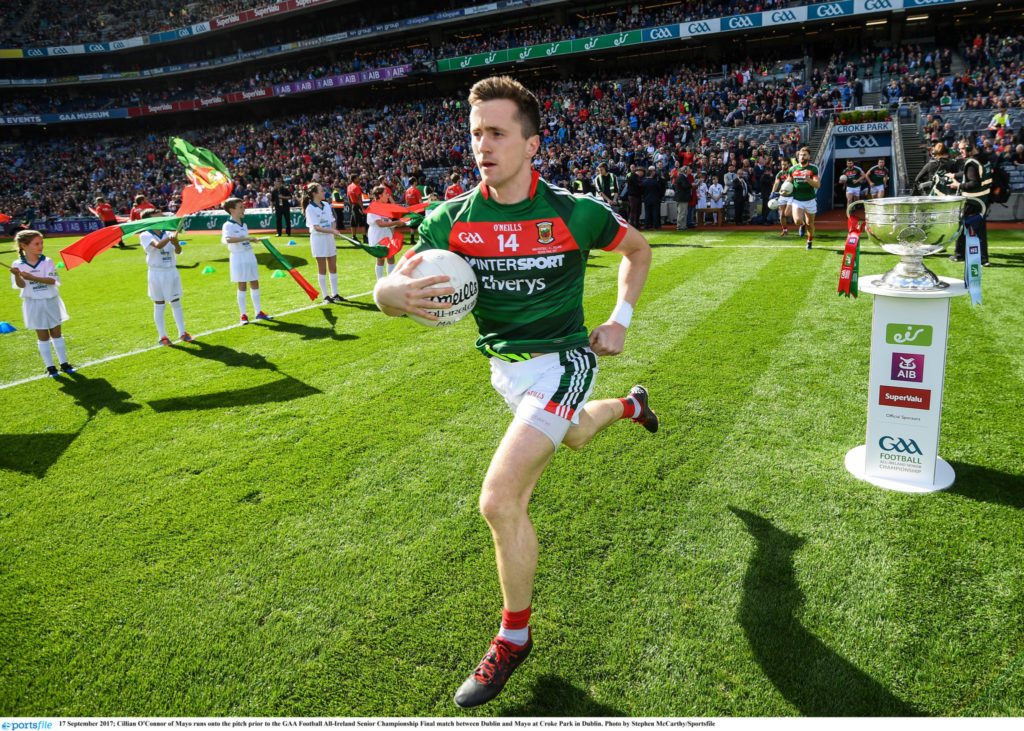 17 September 2017; Cillian O'Connor of Mayo runs onto the pitch prior to the GAA Football All-Ireland Senior Championship Final match between Dublin and Mayo at Croke Park in Dublin. Photo by Stephen McCarthy/Sportsfile

O'Connor had scored 10-points in Mayo's 15-point victory against their neighbours Galway earlier this month in the National Football League, in what was his first inter-county appearance in a year due to a knee injury picked up in the summer of 2019.

The former young footballer of the year says he's feeling fresh and motivated for this weekend but he was hoping to get another run-out before that match in Carrick-on-Shannon.

"I was hoping to test myself against another high-quality Division One team ahead of the Connacht Championship and to pick up some form and confidence.

"But look that didn't happen so I can't dwell on it and now I need to get a good week in at training and measure myself up against the members of the Mayo panel and the Mayo defenders.

"They'll be chomping too and it's going to be a competitive week's training and I have to try and be as ready as I can be for this weekend."

With the inter-county football Championship season set to be played out in a seven-week period, O'Connor says players are aware that even a minor injury could end their campaign.

"I think it's probably in everyone's head, I know the way I manage it is through recovery after training and matches.

"Your diet, hydration and nutrition, everything has to be perfect. If you turn up at training tight then you're the risk of a soft tissue injury.

"Normally a strain would mean missing just a session or two but the consequences of a small injury this year are so big that everyone is trying to stay injury free."