This is the first year of new rules at SW19, whereby the final set at the championship can only go to 12 games apiece before a tie-break. Regardless today's decider has ended as the longest ever Wimbledon singles final, even surpassing the 2008 final.

Federer, who turns 38 next month, reached another milestone when he beat Rafael Nadal in four sets on Friday to become the oldest man to reach the Wimbledon final since 39-year-old Ken Rosewall lost to Jimmy Connors in 1974.

Djokovic twice led by a set, but Swiss star Federer remarkable durability to take the match to a deciding set. The pair's most recent five-setter came at Wimbledon back in 2014, which last three hours and 46 minutes.

The tiebreaker at 12-12 was instituted after last year’s tournament when Kevin Anderson eventually saw off American John Isner 26-24 in the fifth and deciding set in the semi-finals. It was meant to provide a more definite finish time for previously potentially lengthy matches.

It's Djokovic's fifth straight win over Federer, with the Swiss not winning a match between them since the semi-final's of Wimbledon in 2012. Three of Djokovic's Grand Slam wins at SW19 have come as a result of beating Federer in the final - in 2014, 2015 and now in 2019. 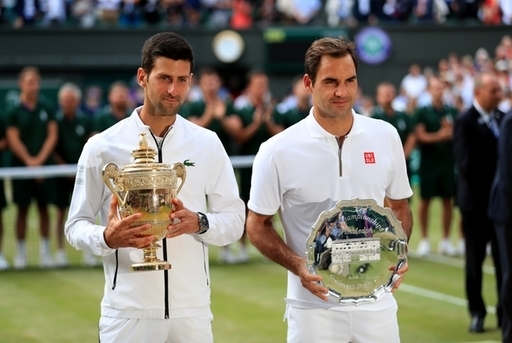 Novak Djokovic with the trophy after beating Roger Federer in the mens singles final on day thirteen of the Wimbledon Championships at the All England Lawn Tennis and Croquet Club, Wimbledon.

Djokovic has now won four of the last five Grand Slam singles titles, running his career total to 16 — just two behind Nadal’s 18 and four behind Federer’s men’s record of 20. The Serb spoke of his delight afterward, and said this final is up there with the greatest of all time:

"If this was not the most exciting final then it was definitely the top two or three. I was up against one of the greatest players of all time, Roger, who I expect a lot. Unfortunately one player has to lose and we both had our chances. It’s unreal to be two match points down and come back. It’s a bit strange to play a tie-break at 12-all as well."

Federer, who is a father to two pairs of twins, was determined to put the match behind him and concentrate on getting back to family life.

"I will try to forget. It was a great match. It was long, it had everything, I had my chances, so did he. In a way I’m happy. But Novak was great. Well done. I still feel good. I can still stand. Back to dad and husband. It’s all good.”