Roger Federer progresses to third round after US Open scare

World number three Roger Federer last night progressed to the third round of the US Open at Flushing...

Roger Federer progresses to third round after US Open scare

World number three Roger Federer last night progressed to the third round of the US Open at Flushing Meadows in New York.

The Swiss star survived being a set down against Bosnian world number 99 Damir Dzumhur 3-6, 6-2, 6-3, 6-4 under the Arthur Ashe Stadium roof to make the next round.

Federer's win sets up a third-round match against either Britain's Dan Evans or Frenchman Lucas Pouille - they play this afternoon after rain caused the cancellation of Wednesday's day sessions on the outside courts.

Federer hit 17 unforced errors in losing set one but recovered to progress with little trouble from that point on. After a rusty start to the tournament, he says he needs to improve in he is to win his sixth US Open title.

“I clearly have to play better from the get-go. I'm not concerned. It's all good, you know, and I just need to take the positives out of it, because once I lose that first set I do get better, which is a good thing.”

Federer won the trophy in 2004 right through to 2008 for an incredible five-in-a-row but hasn't lifted the major in New York in eleven years now.

The reigning champion and world number one Novak Djokovic after a scare last night - albeit his scare came via a shoulder problem.

The Serbian three-time winner of the tournament received treatment on his left shoulder between the first and second sets of his 6-4, 7-6, 6-1 win over 26-year-old Argentine Juan Ignacio Londero.

It's rare for Djokovic to be pushed so hard so early in a Grand Slam, and next, he awaits the winner between fellow Serb Dusan Lajovic, ranked No. 29 in the world, and American Denis Kudla. 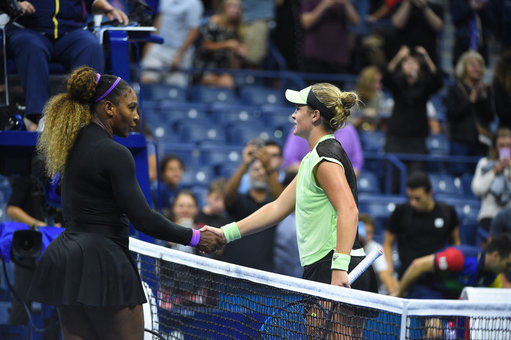 Serena Williams (USA) during her second round at the 2019 US Open at Billie Jean National Tennis Center in New-York, USA, on August, 28, 2019. Photo by Corinne Dubreuil/ABACAPRESS.COM

Williams says she knows she needs to cut out unforced errors as she progresses further in the tournament.

"I just had to stop making errors, there were just too many errors in the first two sets. It was just too many. You can't win tournaments making that many errors. I knew I had to play better and knew I could."

In her entire career, Serena has lost to only three teenagers at a Slam (to her sister Venus at the 1998 Australian Open, Maria Sharapova at Wimbledon in 2004, and to Sloane Stephens at the 2013 Australian Open).

Meanwhile, two-time US Open champion Venus Williams has been knocked out of the singles draw.

Fifth seed Elina Svitolina had five match points saved before she eventually ended her challenge 6-4 6-4 to reach the US Open third round.

Serena Williams ruled out of US Open due to injury

Dominic Thiem forced to skip US Open defence through injury