The 32-year-old former French international was with Kompany at City for six seasons and in that time won a League Cup as well as two Premier League titles.

Vincent Kompany took over as player-manager at the Belgian club last month after calling time after more than a decade with the Blues making over 350 appearances in all competitions.

In a statement on the club's website, Nasri said, "I received a range of beautiful offers but finally with a great deal of conviction, I have chosen Anderlecht."

“I really want to help Vincent and the club realise their plans.”

Samir Nasri first played English football under Arsene Wenger at Arsenal when he signed from Marseille in 2008 - before signing a four-year contract with Manchester City in a deal which was worth around €27 million (£25 million).

He was banned from football in February 2018 for six-months for breaching WADA rules before it was increased to 12-months. 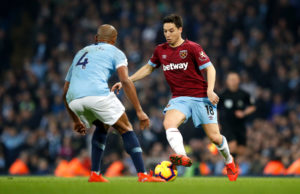 Speaking after getting the Anderlecht job last month, Vincent Kompany said, "in one season we have to get better than five other teams. But I am convinced that with a few changes we will succeed."

"I do not want to choose between playing nice football or becoming champions. I want both. I know that I put so much pressure on myself. Let's be very clear, I didn't come here to be second."

The former Manchester City captain also spoke about his experience under the Citizens' current manager Per Guardiola:

"It was like being at university every day. He explained everything with such clarity and I learned an enormous amount from him. I am no Guardiola by any means. But I think I was a good student."