Everton manager Marco Silva says he is not focusing on the pressure on his position after yesterday'...

Everton manager Marco Silva says he is not focusing on the pressure on his position after yesterday's 2-1 Premier League defeat for his side at the King Power Stadium.

The Portuguese boss saw his side take a first-half lead via a Richarlison header before Jamie Vardy equalised for the hosts on 68 minutes.

Then in the fourth minute of added time, former Manchester City star Kelechi Iheanacho struck to leave the travelling Toffees with their eighth defeat from fourteen league games so far this campaign.

Silva told evertontv after the full-time whistle he felt his side deserved more from the game.

“It was harsh for us what happened in the last minutes. We did not deserve it at all – we deserved to take more from the game than we did but that is football.

“The players know what my ambition is every day – the feedback they receive from me is to win every match. That has to be our philosophy as a football club.

“We knew the players should be brave and we were brave.

“It is tough in our dressing room but I gave the right feedback to them. They have to put their heads up."

FT. Sickening way to lose at the death after a battling performance. #LEIEVE pic.twitter.com/WBP4kk2liY

Silva also said he was proud of his team's spirit during the game, despite the result.

“When we come here and fight and show this team spirit, then good things will come.

“It is not easy for opposing teams to come here and score against Leicester - we scored and had chances to score more.

“We can look at how we conceded the goals but looking at the match and the way our players stuck within the plan and strategy… we did well.

“We were the best team in the first half. We stopped them [from playing], they did not create many chances.

“When we had the ball, we had our moments, we scored and had good moments in the first half.

“We spoke at half-time about what we could improve with the ball. And we created chances to score and had dangerous set-pieces.

“The game was balanced after their equaliser, we changed the formation and played with two strikers.

“We lost the ball when it [the match] was under control and they scored.” 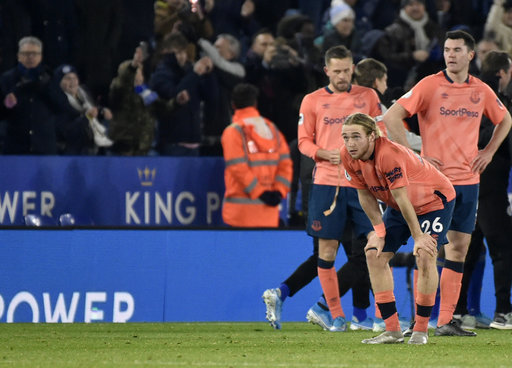 42-year-old Silva also spoke about his side's attitude coming into upcoming games - starting with the Merseyside derby against table-topping Liverpool at Anfield on Wednesday night.

“It is our obligation [to remain confident]. It is what we should do, another game comes quickly and it will be a tough and busy week for us.

“We have to take the positives from today, apart from the result, and prepare well for the match.

“It will be a tough one again but with this attitude and commitment, we have to go there with ambition and believe we can get a result. I never had doubts [about the players’ commitment].

“The players know our obligation as Everton Football Club – they showed it this afternoon. Together we can change the situation.

"Teams are scoring in the last minutes, if we lose balls they score every time.

“It will change and this type of fortune will come for us, for sure.”

A home game against Chelsea and trip to Old Trafford follow this week's game against their Liverpool rivals for Everton.

David Moyes' name continues to be linked with taking the reigns once again at Goodison Park should Silva be sacked, with Bournemouth boss Eddie Howe also touted as a potential replacement.